Of course everybody has been talking about the Malaysian airliner which disappeared into thin air.  I saw this morning where one of the Aussie satellites had picked up images of things floating in the Indian Ocean.  The US did a fly over and said there was nothing there and, of course, no one believed us so they're all still sending air craft and ships to the area, which I find surprising.  Remember, we are the home of the NSA.  We have the best spy satellites circling the planet.  If anybody should know it's not part of the wreckage of MH370 it should be us, our eyes are everywhere.  Of course no one wants to believe us.  The whole world wants an ending.  They want closure.  Unfortunately, I suspect it's not going to be that easy.  There are too many unanswered questions.  This does not mean that nobody knows, somebody always knows, they're just not talking.

This closure thing I don't understand at all.  There are sad endings and then there are bad endings.  I don't think many people want to consider that this flight into nowhere might have one of those truly terrible endings.  If you ask, a vast majority of people will tell you the plane is at the bottom of the Indian Ocean.  They're positive it crashed, killing all on board.  Until there is concrete proof that is only an assumption.  For all we know the pilot may have been practicing simulated landings on uncharted islands.  He may have done scores of calculations on the survival rate of both he and the passengers on board.  We don't know, or if someone does they're aren't talking.  People want a black box so they can tick off the last seconds of the flight.  They want it to have crashed because for something else to have happened... well, that would be a truly terrible ending, wouldn't it?  That's an ending no one wants to consider.  They want the easy closure. 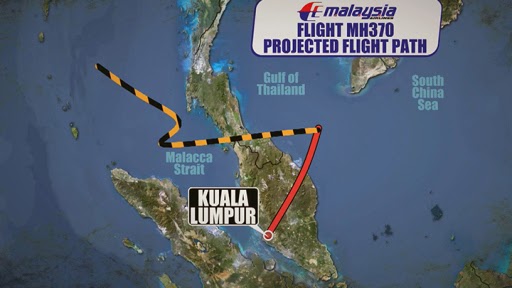 Perhaps we should start blaming aliens.  Of course, that's a fairly unrealistic approach, still it does provide an answer.  I'd seen something about a news report on CNN that mentioned a black hole - that, too, is a possibility even though it sounds very much like a premise for one of the Syfy Channels notoriously bad B movies.  Until there is an answer, any crazy concept, no matter how absurd, should be given at least some consideration.  For all we know the pilot and co-pilot may have handed the plane over to terrorists for a king's fortune, or they might have discovered the long, lost route to Shangri-la.  There may even be a James Bond super villain out there who has plans to take over the world.  The easy closure is to say it crashed into the sea.  Of course everyone and his brother will be trying to cash in on the mystery.  It would not surprise me if, when the truth comes out, this has a pretty messy closure, the kind of sad ending that breaks people's hearts.