When was the last time you purchased something at a major retailer, say a Sears, or a Lowes, or a Target or some other major retailer and had the cashier didn't ask you if you want to put your purchase on a credit card? You probably can't remember that far back.  That questions is usually the first thing that pops up on the cashier's screen after your item is scanned.  You see retailers want you to buy on credit, they don't want you to pay cash.  Customers who pay with cash spend less money.  Retailers view this as a Cardinal Sin.  Even more important, they want you to open up one of 'their' credit cards.  'Their' credit cards are special.  They earn the slightest bit of a percentage more if your charge is on one of 'their' cards.  Now, doesn't that make you feel special?

Studies have shown that people will spend more if they're putting it on a charge, even if they really can't afford more.  Some people are always trying to rationalize how they can swing the monthly payments, even if it's only paying the minimum amount due.  The fact that minimum payments earn the credit card companies sometimes thousands of dollars in interest isn't factored into their thought process.  The means the $900 HDTV may, in the end, cost you $1300 doesn't connect and retailers could care less as to how much their product is actually going to cost you.  They are in it for the moment, that second of instant gratification they get when your credit card gets swiped.  I wouldn't be surprised if the next major financial upheaval we are for to deal with ends up being directly related to personal, credit card debt. 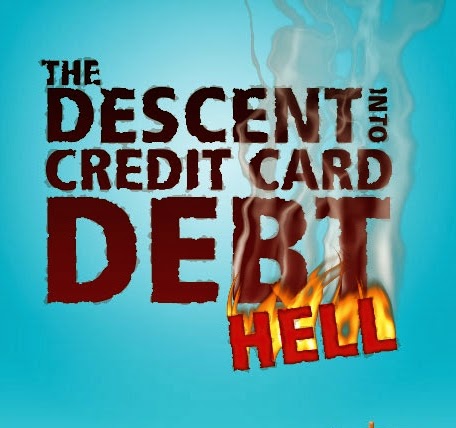 Do you think the credit industry really cares about your personal finances?  Hell no.  They love shoppers, those foolish people who can't say no to a perceived bargain.  As someone who works in retail, I see these people all of the time.  They can't wait to pull out the card at the first hint of a deal.  Do you think retailers give a hoot about your finances?  Hell no.  That's your problem, not theirs, no matter how attractive they make their 'special financing'  Once that sale has been finalized, you are indebted to the credit card company, not the retailer.  The minute that receipt prints out retailers wash their hands of you.  True, they don't force you to buy from them, but they also do absolutely nothing to dissuade you from making the purchase.

This is one of the problems with the American Economy.  Credit is the food it eats and the air it breathes.  Credit is the lover the economy takes to bed.  If people were to stop buy on credit the economy would crash.  Recovery from the last recession took so long because people chose to pay with cash rather run up their credit card debt.  I know, I work in retail.  The numbers of people using their debit cards increased dramatically and those relying on their Visa, Mastercard and Discover card decreased.  Of course that's changed now and people are backing to back to burying their asses in credit.  Eventually credit card debt will hit the tipping point, like an old, fat cow, and it will flip over.  Then everybody will be pointing fingers trying to place the blame on somebody else.  Maybe if retailers chose to slow down their growth, decided to be satisfied with less then 5% or 6%, perhaps be happy with only 3% the fall into credit hell might be averted.  Perhaps if people realized their debit will, at some point in time, catch up to them and voluntarily charged less.  Maybe if they understood how using their credit card to go to the movies was not such a good idea.  Shit, there are a whole bunch of perhaps' and maybes people are ignoring constantly.  To slow down economic growth would be un-American and we wouldn't want that now, would we.
Posted by Dave R at 11:49 AM