This morning, while looking though my news feed from the New York Times, I spent some few minutes on an article by Juliet Macur in which she discussed her new book, "Cycle of Lies: The Fall of Lance Armstrong."  I am not a fan of Armstrong.  In fact, to my mind there are very few who epitomize failed American values as much as he.  The excerpts I read were interesting.  They irritated me... actually, they pissed me off.  You see I have often wondered if he ever really was a great cyclist, or just a mediocre one who relied on performance enhancing drugs and procedures to shit on cycling.  I've written before on how I've felt for some time that for Armstrong the sport was always secondary.  Now, thanks to Ms. Macur's book, we may find out it may not even have been that high on his list of priorities.  This is a sad statement because we would like to believe our sports stars give it all for the sport, whether it be Cycling, or Football, or Baseball.  More and more we are being told that if you take away their steroids they are average, that if you cheated the same way they did you'd be just as good: anybody could be a Bobby Bonds or a Lance Armstrong.  Ain't that the shits.  We want our sports stars to be special because they work at it and earn it, not because they cheat. 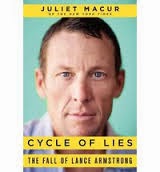 Being a cynical person, I will admit to have never being what I call a Lancling (someone who deified Lance as a cycling god) because I always felt there was something a little too good to be true about him.  I remember watching him sip champagne from a flute while riding into Paris on his fifth tour win and thinking 'there's something wrong with this guy.'  There was no arrogance or cockiness in his look, something you would expect from a five time tour winner, only smugness.  The only time cheaters actually look astonished or angry is when they lose; they cheat to come in first, not second.  Why did he cheat?  Because he could.  Because there were hundreds of Lanclings who were so entranced they had no problem turning their heads or averting their eyes.  He was good for the sport of Cycling.  A lot of people made money because of Lance.  Hell, he made a lot of money.  Now he is on his way to being a bad footnote.

Will I buy Ms. Macur's book?  I am seriously considering it.  I'm certain there are certain parts which will piss me off.  But then, the only way you learn how to deal with cheats is to learn as much about them as possible.  I'm sure this book will be a major learning experience.