NBC Sports disappoints with Tour Down Under coverage

Now, while I have to admit Australia is a long way away, there is no reason why NBC Sports needed to give it such crappy coverage.  Those of us who like cycling got basically a half hour per day for highlights.  That's it.  Those half hours?  They were not even broadcast at a set time, say like 5 PM everyday.  No, one day it was at 1:30 PM, the next day at 3:30PM, talk about stupid programming.
On February 10 they will dedicate one complete hour to the six day race.  Boy, I'll bet that's going to be chock full of sprints and chases! 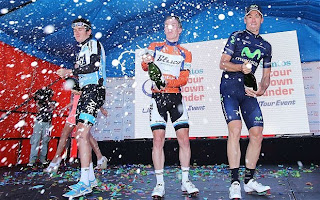 For those of you who missed it, here are the top three winners.

Now, I'll admit the Tour Down Under does not have the prestige of the Tour De France, but let's give cyclists their due.  Of course, cycling has always gotten short shrift here in the United States.  It's not American, not the way major league baseball is, or football, or hockey... well the NHL did kind of shit in their pants this year, didn't they.  In fact, recently the only cycling news people were even talking about was that American embarrassment, Lance Armstrong.  Of course, why should he really be considered an embarrassment?  It seems as though every news feed I get names players of major league sports who have used performance enhancing drugs.

The real problem is that we want to dominate.  We need to be number one.  All you need to do is watch the Olympics to understand.  We wouldn't send athletes if we weren't winning a lot of gold medals.  To see how right I am, compare the Olympics with the World Cup.  Our soccer players go out and bust their asses, but when it comes to coverage our Sports Networks only provide a video feed when the Americans are playing.  This is not the case in the other countries of the world where there are actual rivalries; not so with the United States.  I suspect the only reason we send a team at all is because we feel it's necessary.  Sure, we'd like them to win, but very few here really care, after all, it's only the World Cup.  It's the same thing with cycling, a sport that, because we don't dominate, we really don't care to watch.