Hello Thursday!!  Outside, the temps are a comfortable 70 (F), however we do have rain.  Supposedly a thunderstorm is supposed to pass overhead.  That doesn't seem to be happening.  All I can hear is the steady rain on the roof.  That temp?  70(F)?  Well, that's about as warm as it's going to get today.  Summer is ending on a rather chilling note.  That's fine.  I'm ready.  Soon the leaves will be changing.

Yesterday was a day filled with mini-accomplishments.  One thing that I plan to wrap up, possibly when I'm off tomorrow, is transferring all of the slides I took while in the Navy to jpeg images.  I have about 2000 and every one of them is at least 45 years old, however I'm not saving all of them.  quite a few are repetitive, like 24 pictures of people working with silver in a factory in Baguio, Philippines.  Of course, the rewards are finding the gems, like the pictures of a snake charmer in Singapore.  Don't worry, you'll get so see some of them when I've finished.

Now, isn't it nice to know there are certain things we can all rely upon?  I mean, nothing changes about them.  They are constant.  They stay the course.  Nothing will ever alter their heading.  Ever.  Take, for example, the investigations into Donald Trump.  No matter how greatly the evidence proves guilt, no matter how many people flip and testify against him, these investigations will always be witch hunts.  Knowing this, I did a little investigating on my own.  Did you know that not all witches wear pointy hats?  Or that their evilness is long-lived? Or that witches are gender based?  The male witch is called a warlock.  This immediately proves him wrong.  These investigators are not looking for some scaggy, old bitch who flies around on a broom.  No, if Trump is correct, this is a warlock hunt.  Well, I hate to admit it but he's correct.  As proof, I offer up this old lithograph as proof. 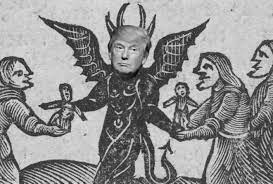 Anyway, I don't know about you, but I'm finding this week to be more than a little titillating in regard to the Donald.  Joy of joy, things have been going terribly for him.  Thanks to the lawsuit filed by the Attorney General of New York, people suspect he's not really a billionaire.  And all those times he took the 5th?  In a civil trial, which this is, they can be used against him.  This means that the 440 times he refused to testify on the grounds it might incriminate him, he was really telling the courts, "yeah, I'm guilty as hell."
And, of course, the 11th District told Trump's pocket judge Aileen Cannon that she has her head up her ass.  Contrary to what his cult wants to believe, you can not declassify documents simply by thinking they are declassified.  I suspect an indictment for treason from the DOJ will be forthcoming.
The fact that he keeps shrieking witch hunt proves beyond a doubt that witches really do exist.