This morning, because the temperature was a comfortable 58 (F), I decided to switch to my fall wear, which is also pretty much the same as my winter wear: sweatpants and sweatshirt.  I love sweats, big, and baggy, and warm, but only as casual wear at home.  There are those who think they're great casual wear in public.  Nope, not for me.  A pair of pants and a shirt are nice for the simple reason that not everybody looks good in sweats... in public.  Just like yoga pants.  You have no idea how many times I have come to being blinded by women showing up at the flooring desk wearing yoga pants that are stretched to the max.  When you can see their stretch marks through the leopard skin pattern, there's a problem.

And yesterday was a day of accomplishment!  I have a big home improvement project coming up.  Currently, my washer and dryer are in the basement.  That's changing.  They are being relocated to the 2nd floor walk-in closet.  I'm speaking American floors here not European, where they think of the first floor as the ground floor.  Right now, there's carpet... or I should say was carpet there.  I removed it yesterday.  This is what that 118-year-old floor looks like.  I'm betting there's lead in that paint, so I'm not sanding it down.  Rather, I'm going to be putting in some marble plank flooring that I'll be picking up from work today. 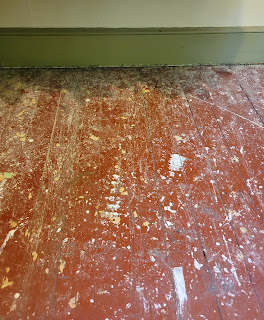 And, of course, yesterday the DOJ filed an appeal with the 11 District Court regarding failed judge Ailleen Cannon's decision to join Trump's defense team.  That is what people are saying, in case you didn't know.  Perhaps it's because she is completely ignoring the facts.  Even though the 11 District Court is a bit lopsided, 6 Republicans 5 Democrats, the belief is there will be no problem.  Siding with Trump would shit away all precedents and prove that the district is corrupt.  I'm not saying that isn't going to happen, just that it's unlikely.
Ronnie D, the governor of Florida is coming under a lot of fire for his political stunt of flying immigrants from Texas to Martha's Vinyard.  Ronnie doesn't think about the details, though.  When he attempted to parade the smugness of his stunt at a press conference, his braggadocio stumbled badly.  His hands fluttered and flailed almost as bad as Donnie Jr.'s on a good day.  As someone pointed out, this is why Ronnie doesn't want to debate.  When things move away from his prepared statements, he flounders and gets angry.  I suspect Ronnie will be a one term governor.