The Dogs of Summer

Can we all say "Howdy," to a nice, sunny Thursday morning.  Downstairs, the dogs are jumping around, at least Lily is, Biggie is no doubt observing from the sofa.  For a 9-year-old dog, she is very active.  Biggie is... well, big.  He's getting 900 mg of gabapentin in the morning, and another 900 mg in the evening.  This dosage works well for him.  He is a lot more active than he had been.  Dogs are the same as people when arthritis sets in, they tend to slow down.

Yesterday was sort of a day of accomplishment.  A time-consuming chore was completed, a little yard work was done, and words were written.  I'm always happy to when words get written.  The issues with B & N seem to have been resolved.  They are much slower than KDP, which is something I'm going to have to get used to.

Homemade ice cream was the time-consuming chore.  Pics tomorrow.  I'd post them today but after I finished cleaning off the front porch, I blocked off the steps with a piece of wrought iron fencing and let the front door open.  Lily loved it.  Biggie laid right inside the doorway letting the late summer breezes blow over him. 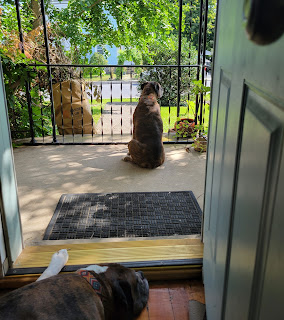 Of course, there wasn't a lot of political news yesterday, other than the Biden administration managed to get a tentative deal going between the railway owners and their employees.  Unions seem to be coming back into favor.
And there was more shit about the Trump mob family and the small insurrection fete Donald chose to hold.  Meadows has apparently turned over everything he'd originally turned over to the Jan 6 committee, to the DOJ.
Marco Rubio jumped on board the Lyndsey Graham anti-abortion law train.  People are saying "what the hell?"  Well, I have a feeling about that national law the Republicans are suddenly trying to push.  It's really about the midterms.  Remember that after Biden won many, many pundits said traditionally the losing party in the general election picks up seats in both the House and Senate?  Well, Republicans thought that meant it was going to be a done deal, so they basically all turned their asses on America and let out a big fart.  The Supreme Court they politicized overturned Roe v Wade and, as a result, people got pissed.  The red tsunami they had been counting on ran into a big wall.  Then the Jan 6 committee began its hearings, and Trump started looking really bad.  And then there was the secret document horseshit; many Americans believe he was selling them to foreign governments.  Now it appears that the Republicans are almost assured of losing a few more seats in the Senate, and possibly winning only one seat in the House, which keeps them a minority.  The loyalty they had counted on is disappearing.  When your party is in political trouble, you do whatever you can to hold onto your base, so they're proposing the one thing they believe will keep their base loyal: a national anti-abortion law.   Believe me, the Republican Party is desperate.