Well, will wonders never cease!  Well, it's actually not really a wonder, more of an error on my part, but that doesn't make it any less of a wonder.  You see, I misread my schedule.  Or, probably to be more precise, I made an assumption.  Never make an assumption.  You see, I roasted a chicken with rosemary yesterday assuming I'd take a half-breast along to work for lunch.  Wonder just when my lunch was scheduled, I checked my calendar and... Well, son of a bitch!  I'm not scheduled to work today!  Unless I request off, I always work Saturdays.  It's a given.  Except for today.  This is like a present.  I now have an extra day to fill with chores!

Last Tuesday, Biggie's vet changed up his gabapentin dosage.  She didn't increase it but said he could have another capsule in the middle of the day.  Yesterday was the first time since we've started this new regime that I saw a noticeable improvement.  without his normal aches and pains, he had much more energy yesterday, and no problems sitting down.

And since we are heading into autumn, my late summer roses are blooming. 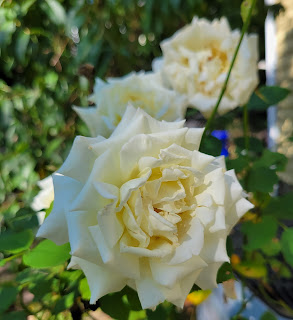 And while common knowledge tells us to assume nothing, there are times when we can't help but assume, especially knowing the nature of certain things.  Like those 43 empty file folders the FBI recovered from Mar a Lago.  The reality is that Trump's ego mandates he prove his superiority any and every way he can, and so solidifies our assumptions he would eagerly give those documents to anyone he was trying to impress.  None of us have any problem picturing him preening as he hands over documents saying, "oh, it's nothing, just some nuclear secrets I've had lying around."  On the other hand, many thought he there was at least one thing he would do that was presidential.  That was a bad assumption.
Truly, the word assumption is a bad word in regard to Trump.  Do not assume he will do the worst, expect him to do the worst.  He's going to be at a rally up in Wilkes-Barre with the assumption being that he's going to help the foundering campaigns of Mastriano and Oz.  Instead, the reality is that this being his first rally since Mar a Lago he will spend most of his time complain about the FBI, spitting out lie, after lie, after lie.  Expect nothing less.