Okay, so there's no other way for me to put this, yesterday work was boring.  While I did talk to some customers, most of my time was spent checking out headlines.  We hired a Jordanian to replace the Haitian and he seems to be working out much better.  The last we heard of the Haitian, he was up in Canada and didn't know if the United States was going to let him back in.  We shall have to wait and see.

I'm still waiting for Barnes & Noble to get back to me on publishing.  The hang-up appears to be with my W9.  Evidently, they didn't get it when I initially emailed it to them.  When I can publish, my books will be available in either paperback or eBook.

Back on 9/11 the Twitterverse was in full speculation mode; Trump had suddenly, and without notice, arrived at Dulles airport in a rented jet.  People wondered if he was ill, or if he had arrived to give some secret Grand Jury testimony, or if he was going to be indicted and had flown to Washington to avoid a perp walk similar to the one Steve Bannon had taken.  No One Knew!  The secrecy began to unravel yesterday afternoon at his golf club. 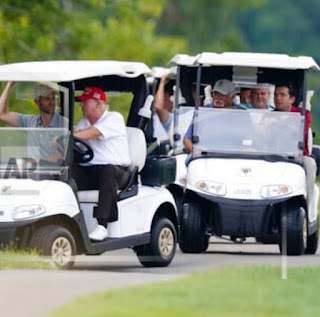 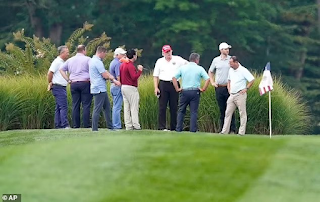 He, and eight of his co-conspirators had a golf outing... when no one played golf.  Devin Nunes was there, so was Kevin McCarthy, and Eric, and Newt Gingerich (you can see him in the top photo).  The reason for such a clandestine outing is to keep people from knowing it's taking place.  Obviously, the secrecy bit failed entirely.  There are quite a number of videos of them driving around in their carts and standing, talking in the rain.  Ooops!  And at first people wondered why.  Then the news began breaking.  So, why did Trump suddenly fly into Dulles?  Over the past week, the DOJ has issued over 40 subpoenas, and confiscated 2 cell phones from his close allies.  This is an 'oh! shit!' meeting.  They need to get their stories straight.  This is the gang that couldn't shoot straight, try to make sure they can corroborate their stories in secret.  The bottom picture has been dubbed Da Vinci's Last Subpeona.