This will not save Trump's ass

What can I say, the weekend has finally arrived.  Today is supposed to be gloriously sunny (I work this afternoon), however tomorrow there is a 90% chance of rain (I work then, too).  They're forecasting the rain to continue into Tuesday, the first day of my mid-week weekend.  Next week I only work 3 days, that's fine with me.  This past week it was 4.  That's almost too much time to spend at the store.

I've been chatting with my brother about the house next door, advising him to disincline himself to purchase.  I get bad vibes.  Too many issues.  The new roof will cost between $20 to $25 thousand.  The big bugaboo is water damage.  Any time you have water involved; it is not a good thing.  Without ripping out the walls there is no telling where the leak might be.  Because water is involved, mold might also be part of the picture.  Mold remediation is very expensive.

And King Chuck has been formally announced.  I think I'll call him Chuck until he proves he's got the DNA of a Charles.  His mother was Elizabeth, never a Liz or a Beth.  Chuck, however, needs to earn his name.  Almost every article I've read has noted that he is not nearly as popular as his mom.  At 74 years of age, he has definitely had enough time to prove that he is not a 'people person.'  His sons are both much more popular, so I wouldn't be surprised if a lot of people have started the timer, counting down the days until he passes, and William is crowned King.

I was walking through Petra yesterday:  2.70 miles averaging around 3.6 miles per hour.  It is so much bigger than people think.  Of course, most only know it from movies.  Believe it or not, this too is Petra. 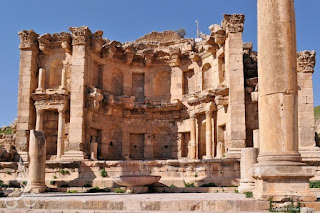 Sometime, either before or after Bannon was indicted, he evidently said that "I have never laundered anything."  Looking at his pictures on the Internet, many find his comment not too surprising.
Oh, and speaking of Stevies, Steven Miller has been subpoenaed.  I believe he has already sat with the January 6 committee at least once, now, however; he'll have the chance to use the 5th amendment.  In fact, it seems as though both Stevies have had a very bad week.
And both the DOJ and Trump's turned in their lists of Special Masters.  One of the items Trump's team wants is for the Special Master to look at every single document.  This is how you define the intention to delay.  Trump believes that the Republicans will take back the house in November.  They won't.  He thinks that's going to save his ass.  It won't.  What will be interesting is this will help define how deep the collusion runs between Judge Cannon and Trump.