A good thing for America

So, happy Saturday.  After my 7 hour stint at work this afternoon, I'm not scheduled until next Thursday.  I can live with that.  Four days off.  It's anybody's guess at how busy the store is going to be today.  This used to be a transitional period.  Since the holidays are approaching, people begin to think of installing new flooring, especially carpet.  However, we're competing with college football.  I was told that Penn State has won every game so far this season.  Living in Central PA, that is an important factor.  A lot of people want to hear those Nittany Lions roar.

For our Success Sharing weekend, today is ice cream and Blizzard day.  I don't know if that means a Dairy Queen truck is going to be parked in back of the building, or if we're going to be served some sort of knockoff.

My slides are all in my computer, or at least the ones that I'm keeping have been saved.  Most of the 100 + pictures I took of animals at the San Diego zoo are in the trash.  If you want to see a peacock just Google peacock.  What did I save?  Pictures like this.  In 1973, I spent a few weeks working in the radar department of our destroyer escort.  I was flown there by a helicopter (I really don't like helicopters).  here's one of the pictures I took when I flew back to the Constellation.  This is what it looks like from above as you're preparing to land.  And yes, those are jet planes parked on the flight deck. 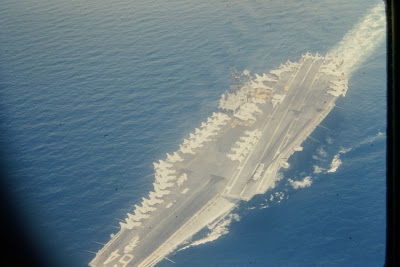 Yesterday, Kevin McCarthy (he wants to be High Priest in the Trump cult) and several other prominent Republicans released the GOP plan for heading into the midterms.  They did not mention their intentions of a nationwide ban on abortion, or their plan to eliminate Social Security.  What they did was release vague statements in a video which some are saying included scenes from Mother Russia and statement from Lehman Brothers that they attributed to Lincoln.  Some smart individual took their Commiotment and added some of the details the Republicans forgot to include. 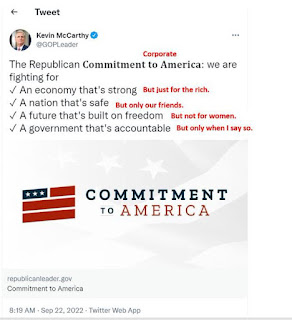 I understand that Sydney Powell is considered on the lam because she failed to show up for a court appearance.  This was to be expected.
An Arizona judge reinstated an anti-abortion law from before Arizona became a state.  This is how you unite the women of Arizona.
And finally, there is evidently growing concern among Republicans in regard to Trump's legal issues.  That, I believe is an understatement.  You see, many Republicans, including Kevin McCarthy, saw the MAGA base as a slice of heaven; a guaranteed voting bloc they could rely upon.  However, that bloc is a minority group that includes another minority voting bloc, the Evangelicals.  They are not 2 distinct groups.  The QAnon crazies?  They, too, are in the MAGA group.  They are in trouble, and they know it.  Trump is killing their party, which is a good thing for America.