The heat Jennifer was talking about yesterday arrives in Central PA today.  We will, however, only be sitting in the low 90s (F) rather than be hitting the triple digit temps she is experiencing, of course, we have another week before summer officially arrives.  I will have to water my little garden, though.

Yesterday was a day of accomplishment!

I tried something different during my 43 minutes on the treadmill: weighted spats.  I've had them for years, and years, and have never really used them.  The weight can be adjusted up to 5 lbs. per foot.  I started light, strapping just one pound on each foot.  Easy peasy.  Your legs are the engines of your body.  The idea is to make them work harder to make them grow stronger.

I decided to put in some marigolds out front.  I planted seeds, but also picked up a pack of 8 small plants thinking they'd get a head start on the seeds.  Well, the seeds are going to town, while the plants are struggling.  They're struggling.  Here's a blurry pic of my dahlias.  They should be bursting into bloom any day now. 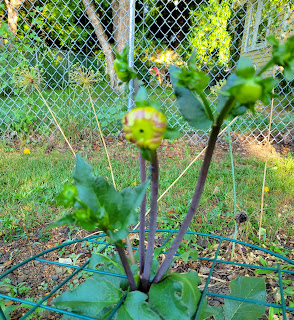 The next January 6 committee public hearing was moved from today until next week, tomorrow's hearing is still on.  I work tomorrow, so I'll not be able to watch it with any type of consistency.
There were primaries yesterday.  I find it fascinating that the media is so laser focused on Republican candidates, especially those endorsed by Trump.  Take Lombardo in Nevada.  He's backed by Trump, getting 38.4% of the vote.  That's the headline, rather than 41.1% of Republicans in Nevada voted for someone else.  If they're trying to show how strong Trump's grip is on the GOP, they're failing.  His candidates might win, but when a majority of Republicans vote for other candidates that grip is not nearly as strong as the media implies.  Trump's dinky little hands aren't nearly as strong as his MAGA base wants them to be.