Call a Liar a Liar

Say hello to a quiet Sunday.  Well... maybe.  I have to work an 8-hour shift today.  Business might not be too slow early in the day, then, there might be a mini rush when the after-Church crowd arrives, but later this afternoon it will be slow.  I'm getting paid for 8 hours whether the store is busy or not.

Yesterday the temps around here peaked at 91 (F).  This is not the first time we've been in the 90s, though this is the first time since summer has officially arrived.  Compared to many other parts of the country, that's not too hot.  Being aware of this, I played a little game with customers by saying "I understand it's hot outside."  To hear their responses, you would think the temps were so high the heat was practically sucking the breath from their lungs.  So, I added that it was much hotter in Texas and their eyes would glaze as dumbness reigned.  When did so many people turn into non-thinking sheep?

I did freeze several bags of peaches yesterday.  I even went so far as to cut out all the little, itsy-bitsy worms.  I get enough protein in my diet; I don't need anymore.

More of my dahlias are getting ready to bloom.  I have at least 3 (possibly 4) more plants in this little garden, with marigolds sprinkled among them.  Color is simply great! 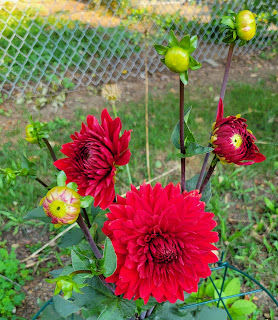 Maureen Dowd, who can at times sound dated, has an interesting piece in the NYT regarding Clarence Thomas.  She does mention how he is anti-contraceptive, meaning he's against birth control.  This is interesting since Ginni, his wife, has never given birth.  She married Clarence in 1987, when she was 30 years old, quite a fruitful age for making babies.  Remember, he is supposedly a devout Catholic, which is why he's anti-abortion and anti-contraceptive, and yet he and Ginni made no babies.  If she wasn't on the pill than God must have damned her to be a barren wife... or maybe, they just don't have sex.
One of the things that has bothered me is the fact so many are afraid to can a religious extremist an Extremist, or a Zealot.  We are dealing with a radical group that is constantly labeling centrists as fascists.  They call Democrats Communists and those people who believe 92 (F) is hot believe them.  Too many people in this country think we have only 2 choices, taking the high road, or taking the low road.  There is a middle road called standing up for your rights.  When a religious zealot, like Marjorie Taylor Green calls us fascists she needs to be called out loudly.  We need to loudly begin labeling these people as Extremists, and we need to do so loudly.  We need to tell America who these people truly are.
Susan Collins' failure was exemplified by her saying Brett Kavanaugh misled her.  Misled her?  No, he didn't, he lied to her.  Told her straight to her face Roe v Wade was settled.  She would have done more to save her face by just admitting that he lied to her.  Do not dance around the truth.  Every congressman, every senator, every time they get in front of a microphone need to remind the American people that Brett Kavanaugh, and Neil Gorsuch, and Samuel Alito, and Clarence Thomas lied to congress.  These people misled nobody.  They lied.