Sunday.  The 7th day of the week.  One on which we're supposed to rest, according to some religious mythos.  But not me, not today.  I'm looking forward to an 8-hour shift.  Things will most likely be slow because it's going to rain, and the big Memorial Day sales are over.  On days like this I get in thousands and thousands of steps.  Sitting at the flooring desk grows boring fast, so I walk.  Think of it as a mini-cardio workout.

The newest new printer arrived yesterday and is set up downstairs.  I did not sign up for the 'toner plan' that HP was offering:  you pay them $1.99 a month for the first 2 months, but then a higher monthly charge kicks in.  I normally buy generic cartridges since they're much cheaper.  I already have several for the old printer.  If they fit the new printer, that'll be grand.  If not?  Well, they were cheap.

And this gave me a big laugh when I saw it. 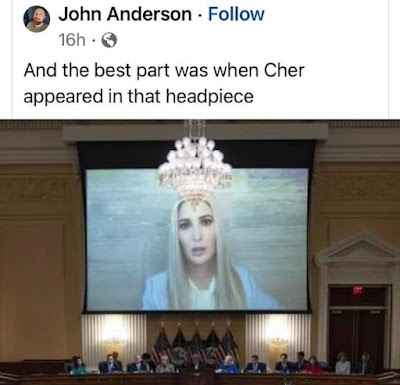 Of course, there was a lot of chatter on social media about Ivanka's cameo.  Let's be honest here.  She's looking out for her own ass.  Nothing else counts to a Trump. You see, her daddy raised her to be just like him.
The edges around the Magaverse are fraying and beginning to shred.  The evil is starting to float to the surface.  31 white supremacists, members of the group Patriot Front, were arrested up in Idaho yesterday.   Their plan was to disrupt, possibly cause a riot at a Pride Festival.  29 of them were riding in the back of a U-Haul, along with their shields, clubs, and at least 1 smoke grenade.  The orange retailer I work for rents U-Hauls.  I know how big that U-Haul is, and they were packed in their tightly, up close and personal tightly, so it wouldn't surprise me if they were celebrating a little Patriot Fund Pride.  Maybe that's why they wear those white balaclavas, so they don't know who's zoomin' who.