The thunderstorm on Thursday night brought a windy Friday as a front moved through Central PA, and today?  The temps are cool and overcast.  This will many of you down south jealous, and probably a lot of you in the Midwest, but our temps are only going to climb into the low 70s (F) today.  I can live with this, though I'll have to water my little garden since the wind will dry everything out.

The fungus which effected the leaves on my nectarine and peach trees has also done some damage to the fruit.  I don't know how much of the crop has been ruined, I guess I'll find out over the coming days.  And, speaking of the nectarine tree, this year I do have nectarines, however they're about the size of a manzanilla olives.  I haven't cut one open, but I'm suspecting is mostly a big pit. 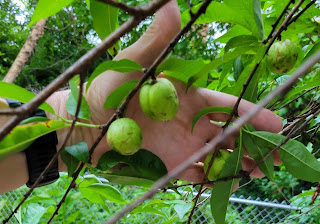 I saw this in the NYT this morning, call it a little treatise on election denying Republicans.  This group will never believe the truth.  Ever.  They are becoming modern day Confederates who will never believe the war is over, that Lee actually surrendered, or that Trump is a malignant force out to destroy Democracy.  I do not doubt for a second that they are decedents of that group of Americans who stayed loyal to the crown during the Revolutionary War.  These are people who need an authoritarian leader, that one thing Democracy will never provide.  Their souls vibrated with the need to say "Shut up!  We're in charge."  The sad truth is that when they do manage to get themselves in power, they cater only to their own wishes, leaving everybody else to just rot.  They are a very selfish group of people.  The reality we need to face is that when they lose, they need to be punished, which creates a problem.  After the Civil War, Confederate leaders were just allowed to go home.  No punishment was levied against them.  That was a big mistake.  They didn't learn.  Ford pardoned Nixon because... well, maybe he thought it was the civilized thing to do, or maybe he thought it would keep the country unified.  Big Mistake.  He should have served jail time.  That pardon sent a message: you can pretty much get away with anything if you're president.  And not only presidents.  Oliver North, a Republican, was found guilty of going through Iran, our enemy, to weaponize the Contra rebels in Central America, and when George H. Bush, a Republican, was elected president he pardoned North.  Holy Shit Bangs!  We have been sending the wrong messages for decades, which is why we have to deal with the Trump Shit Show.  How do we stop this?  End it forever?  Simply lock that asshole up.  Lock up Scott Perry, and Eastman, and Navarro.  The punishment needs to begin now, otherwise they will continue to do it over, and over, and over again.