Well, let's all say hello to a sleepy Sunday morning.  I don't know about you, but I turned off the alarm and rolled over to catch an addition hour of shuteye.

Yesterday the weather was cool and windy, today it's going to be nice, with the temp possibly hitting 78 (F).  Sadly, I do have to work an 8-hour shift.  There is the good possibility the store will be slow.  I am hoping for as much.  It is Father's Day after all, another Hallmark Holiday, and a lot of fathers, especially the conservative ones, are expecting to be treated royally.  If you're a MAGA, it's just another day to suck down beer without thinking about the hangover you'll be dealing with tomorrow morning as you head into work.

I drove down to York yesterday to have lunch with my friend Betsy.  We talked politics.  It was a good time.  The only problem was with the diner, (diner food is great).  She only ate half of a very thick BLT, and half of her sweet potato fries, and so she asked for a box.  We continued our conversation as we walked to the car, when she suddenly said, "oh, I left my box on the table."  By the time she got back to the table, they'd thrown the rest of her meal away.  Bad customer service.  For all that clean-up person knew, Betsy might have left her container on the table while she went to the restroom.  It should have been taken to the cashier, not thrown into the garbage.

My dahlias are preparing to burst into bloom! 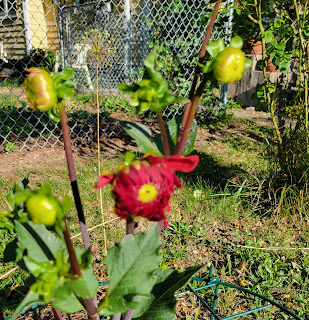 I saw where Trump was at the Faux Faith and Freedom to Lie conference.  That Cracker Jack Crazies were in their version of heaven (no caps).  Once again, he criticized Mike Pence for not breaking the law and creating a constitutional crisis.  And as if cue, Steve Bannon called Pence a Judas.  Guess who wasn't at that phony festival of fools.  Mike Pence.  He avoided it for the first time in 5 years.  Can you guess why?  Well, besides being a coward, he wants to run for president.  More power to him, since there are 2 groups of Christian voters:  the Evangelicals who believe God sent Trump, and the rest of the believers who quietly shake their heads at this blasphemy.  We might end up with a knockdown, drag out war, Christian against Christian war.  Honestly, I don't think Pence has the fortitude for such a fight.  Remember, when his little, faux Christian world was spinning terribly out of control in 2020, the person he turned to for advice was the namby-pamby Dan Quayle, not the aggressive Dick Cheney, who'd been Vice President for 2 terms.
Posted by Dave R at 8:24 AM