After one day off, I get to return to work today.  My next day of is July 4th.  I can't remember ever having off on this particular holiday.  Normally the store closed around 7 PM so people could do the 'fireworks' thing with their families, but not this year.  That's odd.

Yesterday was really hot here, 97 (F), though not nearly as insanely hot as Portland, OR.  Around 0900, I went out and mowed my lawn.  Can we talk about being sweaty?  My lawn is not that large.  On a bad day it'll take me half an hour to mow the entire thing.  Yesterday was a pretty good day, only about 20 minutes, and I needed to take a shower afterwards.

In fact, I accomplished so much yesterday, I was rather pleased with myself.  Peaches were frozen, about 4 quarts worth, laundry done, the fish tanks cleaned. 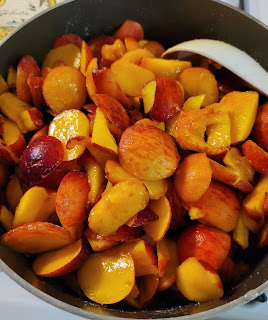 And also connected with some of my Navy friends on a Zoom call.  One of them hates Democrats.  Literally.  He attempted to bring politics into the conversation and got shot down.  Good. There are certain times when you need to keep your politics to yourself.

I understand our failed presidential candidate wannabe fascist dictator is going to be in Texas today.  He's going to the border.  Nope, we're not kicking him, though there are quite a few who would be pleased if that were to happen.  It seems the slimy governor, a loser named Abbott, has started a 'go fund me' to build The Wall.  I wonder how much money the loser's going to donate?  Probably none, unless his failed accountants can use it as a tax deduction.

And what about that MAGA governor sending 50 National Guard troops to the border?  Their all expense paid trip is being paid for by a Republican Mega donor.  That part is so filled with hate.