Pleasing all of the People

Well, this is the last day of my Staycation.  In my opinion, much has been accomplished.  Starting tomorrow, I will work for 3 weeks and have another... Staycation.  Plan you time well.

The little tank for the goldies is set up, they seem to like it.  I opted for a 5 gallon rather then a 10.  They're small, and will only grow to fit the tank.

I got the Rouvy app set up on my sporting laptop.  They've changed how things work.  I've downloaded 3 of my favorite rides.  Right now I'm planning on alternating, one day with the Tacx app, the next with the Rouvy app.  We shall see how this goes.

Both houses of Congress voted to approve making Juneteenth an official holiday.  How surprising is that.  While in the Senate the vote was unanimous, in the house there were 14 Republican dissenters.  Of course, they had their reasons... you know, the racism they constantly deny.  I didn't check, but does anyone know if these are the same Republicans who voted not to give the Capital Police medals?  Wouldn't surprise me.  and they had a reason for that... The Big Lie.

And what about the controversy about the lack of Afro-Latinos playing leads in "In The Heights?"  This leads to a whole bunch of questions, like:  Are casting directors going to need to go by a checklist every time they cast a film?  You know, one of these, and one of these, and one of these, and one of these? Does the reporter who asked this question understand there are million shades of people out there, and while representation is great, you can't have a million people playing leads?  We are in an evolving situation and people need to patiently let it evolve.  There's an old saying, 'you can please all of the people some of the time, but you can't please all of the people all of the time.'  Change is happening.  History has told us that creating controversy rarely, if ever, accelerates that process.

Finally, something our press, possibly even the world's press doesn't seem to be covering is the Chinese Space Station.  That's right, the Chinese have a space station.  They also have a rover on Mars. 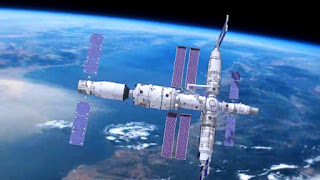 And instead of having a government working to stay ahead of the Chinese, we are dealing with partisanship because a minority group wants to create a socially conservative dictatorship run by a failed American Oligarch.  This group doesn't give a shit about the future, they are too consumed with their craven need for power.  We need to vote these fools into Oblivion.