Well, it's Friday.  That means absolutely nothing to me.  While my weekly schedule covers days, those days have no names.  One is the same as the other.  For someone who likes to have his life fairly well organized, this is a pisser.  Routines organize, and routines require specificity.  The only things specific in my life are the hours I work: 10:30 - 7:00.  Time off is not guaranteed.  I work with an associate who is almost daily requesting days off - he's trying to write his own schedule.  As you might guess, he is also a Republican and a supporter of The Big Lie.

Anyway, my new phone arrived yesterday.  It took me about an hour to set it up since this was the first time I've ever gone through the whole process by myself.  I picked the Pixel up at the store and the clerk took care of the activation.  Last night it was just me.  The only thing that didn't copy over were my apps, everything else, notes, pictures, videos, transferred smoothly.  While the sim card in the old phone no longer works, there's nothing wrong with the phone itself, so it has now become my permanent alarm clock.

And, of course, It's honeysuckle time. 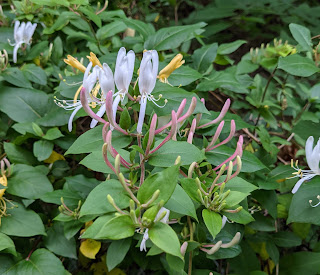 So, Liar #45's blog died... How painful that must be to know his MAGA base didn't sign up.  I suspect the just don't like to read... or can't.
And he's still beating the drum for The Big Lie.  Republicans all across the country and spewing that falsehood.  They need to.  I was reading this morning that we should expect phony audits to reach a fever pitch this summer.  So many lies.  They are so desperate to dictate and control.  These dumb shits don't understand they are playing with fire... and they are going to get burned.  I read in the Washington Post that if a Republican candidate doesn't shriek wildly about the audits, he / she will die in the primaries.  America is watching.  These dumb shits don't understand, we, the Centrists, the Independents, the Progressives out number them greatly.  And we have a very big stick.  We also have no problem with using it to beat the crap out of them.