The Body in the Loch

A couple of you have already read it, Bathwater and Krayolakris. Now it's available for all on Amazon in 3 different versions, Kindle, paperback, and hardback.

Weddings are joyous occasions, two people vowing to love, honor and cherish.  Eli and Max were having a wonderful time at their best friend's wedding, except for the golf, until... a body is discovered.  Sudden death is often accidental, but was this more heinous?  Cold-blooded murder, perhaps?  Could the nobility we respect be not as noble as they want us to believe?  People say the view from McCreary's Creagh is a real killer.  Eli and Max are about to find out if that is true, as they work to solve the mystery of The Body in the Loch. 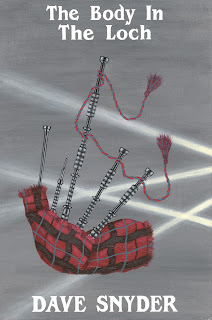 In other news, I had an ultrasound done on my aorta yesterday to check if everything's alright.  It is.  They also did a CAT scan of my lungs to check of anything out of the ordinary.  Things are fine.
Evidently things are not so good with both The Proud Boys and the The Oak Keepers.  The word schism is being bandied about, no doubt because both are in various stages of plea bargains.  Don't forget, there is nothing more sacred to a white extremist then his own ass.  One can only wonder whose name is going to get dropped to avoid jail time.
And Loser #45 is prepping to start his road show to promote The Big Lie because he's such a rotten loser...  He craves the attention, even if it means destroying the groups that put him into power.  I don't believe Republicans have an inkling as to how badly he is going to make them look.