I can hardly believe my staycation begins tomorrow!  Wowee!  And just think!  We're practically halfway through June!  Next week summer will be official.  It's time to start rolling out the dog days of summer.  For me, staycations are already in the books, another 5 day one in July and a 6 day one in August.

For a Friday, yesterday was rather busy.  I set 3 people up for measures, one, unfortunately was for a kitchen backsplash.  We dislike those.  There is a set charge for 25 square feet, however the charge is not calculated on the actual coverage.  Nope. It's on the number of square feet of tile used for the installation.  A customer may only have 23 square feet in their backsplash, but because of cutting and waste 32 square foot mosaics may be needed.  So, the customer will be charged for an additional 7 square feet of tile at a much higher rate per square foot.  The only way to cut costs on this one is to do install it yourself.  Backsplashes are easy.  Watch a few YouTube videos and do it yourself.

I've been thinking of renewing my subscription to Rouvy.  While I like Tacx, all of their rides are in Western Europe.  Rouvy has rides in America.  There are also rides in Eastern Europe.  The only drawback with the Rouvy app was the HRM.  I needed to use both my Fenix 6 as well as the trainer for that info to be imported.  I will have to check and see if they have corrected the problem.  If they haven't, well I just stick with Western Europe.

And I have to say, that bread slicer I bought is simply amazing!  Love it!  The slices are clean cut all the way so there's no problem squeezing them into the toaster. 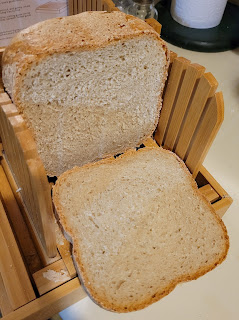 I saw where YouTube temporarily shut down that Republican lying sack of shit Ronnie Johnson for... well... lying.  Go figure.
And what about Florida?  Everyday it seems as though Ronnie DeSantis (yes, another damn Ronnie) sign some sort of hate legislation in his attempt to turn the state into  MAGA heaven on earth.  Me?  I say it's a shame is blotting out the sun in the sunshine state.  Still, if that's how they want to cut it, I say go ahead, slice yourself off from the rest of the country.  Ronnie wants to be president, and evidently he believes the only way to do that is to be an insurrectionist.