Another late sleep-in day because I'm off.   Not that I'm planning on lazing away the day, there's too many chores to get done.  Thunderstorms are forecast, which might alter the outside chores, but that's okay.  I don't have to go to work, which is great.

Yesterday, sales were slow.  My supervisor gave me my monthly report as well as my bi-annual review, which pretty much ended up being a half an hour chat with him telling me several times to "keep doing what you're doing."  He did ask about my future plans.  I had no problem telling him I was planning on going part-time, I just didn't give him a date.  They don't need to know that quite yet.

Here in Central PA, movies will be open fully on June 11.  I am so glad.  For the longest time, they have only been open on weekends and an extra day or two over holidays.  You know?  The days I always work.  We usually never go on weekends because of the crowds.  I suspect  AMC is going to make a killing at the Box Office.  People were wondering if the pandemic was going to completely alter attendance.  Nah.  In fact, I wouldn't be surprised if it's up.  People are ready to get out.  Those who like movies are desperate to be sitting in front of a movie screen.

And I've been riding the bike more.  Practically every day for 10 - 12 miles before going to work.  It is good. 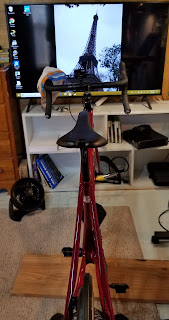 One of the funny things Liar #45 said during his speech to the North Carolina Republicans on Saturday referred to his previous speech at the West Point Graduation, the one where he walked feebly down the ramp.  On Saturday he said the ramp was 'like an ice skating rink,' and that he was worried it might be 'booby trapped.'  This shows how insipidly simply minded he really is, how badly the comments on social media really burned his ass.  He is bitter brained from here to Hell and back.  As if this is something we didn't already know.