Being this was a holiday weekend

Yesterday was... slow, for the most part.  It was Father's Day.  We have a lot of Asians who don't recognize our holidays, not that Father's Day is an official holiday.  As such, customers came in a half hour before I was set to leave looking for information on blinds.  That was not a very good thing.  Consultations easily take an hour or more.  Most people don't realize how complicated the process is.  Luckily, all of their questions were answered by the time I had to leave.  They have my business card and will call and set up a proper consultation.

I suspect that today will be slow as well.  Out next big holiday is July 4th, and by now, everybody is finished prettifying the exterior of their home.  This means sales will drop off.  Even they should have known better, sales' plans do not seem to be taking into consideration last year is different then this year.  The dollars are still rolling in, just now at the rate they were last year.

This morning's ride will probably be through Amsterdam.  It's short, only 7 miles, but a good way to begin the week.

Not much caught my attention over the past couple of day because this was a holiday weekend.  Sure, the media tried to hype something, but the sleazoid Republicans were pretty much silent... except for down in Florida and Texas, two states wishing they could secede from the Union.

Each of those states has a Governor who seems bent on running for the Presidency, and each is trying to out trump loser #45 in their  attempts to hold on to the MAGA base.  By doing so, they continue to make themselves look bad.  Nothing's going to change their.  And when their asses get kicked out of office, they're going to sing that ever popular Republican hymn, 'Voter Fraud.'  In fact, the choruses will never stop until we finally shut up their voices.  Vote blue.

And finally, here's a nice picture of the dogs.  I've probably posted it before, but it's work a 2nd look. 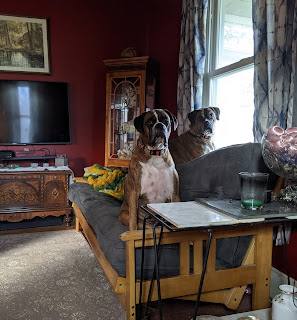