Yesterday, as I was preparing to leave work, we got smacked by a thunderstorm.  On the Accuweather map, we were covered by a bright, hot pink spot.  Red spots are bad, bright, hot pink spots equal strong winds and torrential downpours with lightening zig-zagging in every direction, and loud crashing thunder shaking the very air molecules you're breathing.  It was stupendous!  I do like storms and like watching them from a safe place.  Of course, there are those non-thinkers who have no problem standing in glass vestibules watching shopping carts fly through the air.

Of course, the temps here yesterday afternoon were stuck in the 98 (F) doldrums with nary a breeze for comfort.  When I was young, the few places to actually have air-conditioning were movie theaters, so people when to the movies to get cool.  Nowadays, most retailers have 'air.'  Our, however, is managed by corporate.  This means our lights will dim for a while to compensate for the electric costs used for the 'air.'  Believe, some departments get really dark for short periods of time.

And yesterday Bill Cosby was set free on what they say is a technicality.  He was in jail for 2 years of what was probably going to be a 3 year sentence.  As for the technicality?  Evidently he gave protected testimony as part of a plea deal to one District Attorney, and then another District Attorney used that testimony to convict him.  This is quite non-kosher, and so Bill's a free man today.  This is what happens when you fail to line up all of your ducks in a row.

Oh, and the woman who caused the crash at the Tour de France has been arrested.  Good.  That's something I will never have to worry about.  For those of you who've never seen it, here's my cycling set up. 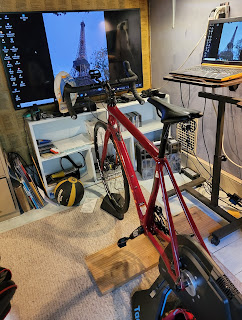 Finally, for those stuck in the dark, they have begun to file charges against the Trump Organization.  This is just the beginning.  There is a growing surge of whispers that Weisselberg is going to flip on his boss.  He's an old man who doesn't want to spend the rest of his days in jail to protect a loser.  I don't doubt he will see the light and strike a plea deal, just like Cosby, simply to save his old ass.