Well, yesterday was filled with surprises... sort of.  First of all there was the weather.  Temps were supposed to be in the high 80's and there was a 5% chance of rain.  Guess what?  We had rain.  Not just once, but twice with one of the storms lasting almost a half an hour.  Remember what I said about us becoming a tropical rain forest?

Another surprise was my car.  It was recall time.  When I arrived at the dealership, I was told about they were only going to take about 2 hours.  Ironically, after 2 hours, I was told they were still reprograming my car and that it would take at least another 3.  Yikes.  That meant spending 5 straight hours sitting in the waiting area.  So they gave me a loaner to go home.  They were right about the 3 hours.  They called about 5:15 PM and told me my car was ready, so I returned the loaner and picked up my car.

Today is the first day in my little Staycation in which nothing is planned.  I have no appointments, no luncheon dates, just time to do what I want.  I'm going to enjoy today.

I bought some new, really snazzy socks.  If I get a chance, I'll take a picture of me modeling them. 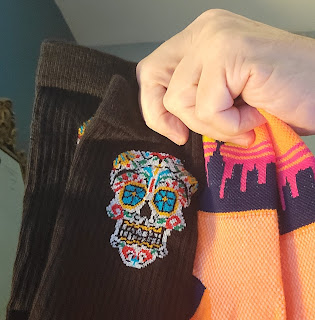 Evidently there is a growing backlash in this country over vaccinations, mostly angry Republicans shrieking about how the government is pressuring them to get their asses vaccinated.  They are intensifying their attack lies because they simply cannot believe Covid is a serious threat.  Hospitals are filling up, and certain states are reconsidering mask mandates.  Isn't it ironic how desperately they want to tell Americans how to live their lives, yet they, themselves, want to be told nothing.  They actually do believe they are special.  Damn.  Maybe this is the real reason why Trump got elected, to cull out the losers.