Today is anything but your normal Friday.  For one thing, I am pleased to say that today really is my Friday.  I'm off for 4 days.  After that mini-vaca, my Friday will be on Sunday for 3 weeks.  I can deal with 40 hour work weeks as long as I get my consecutive days off, the fact that my schedule is fixed for the next three weeks is the cherry on the top.
Today is also Brexit day.  (Sigh)  Many Britons believed Bobo Johnson when he said their lives were going to be better.  Jobs they saw as being unfairly held by foreigners will move back to the continent as corporations move to a more safer financial environment.  Oops. Prices and unemployment are going to go up.  Washington does not see them as equal partners and as such will offer them a trade deal which will hit them below the belt.  Scotland will probably vote for independence and will probably rejoin the EU.  Life in the UK is going to change.  Bobo Johnson is wrong.  Here's a bit of slang for my readers around the world.  In America, your johnson is another name for your dick.  This quite accurately describes Bobo... and this is what he's going to do to the UK. 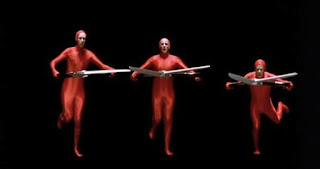 Today is also the day in which the Republican controlled Senate is castrate the impeachment process.  It's the only way they can keep their tinfoil dictator in power.  I saw where Collins says she will vote for witnesses.  You can be Moscow Mitch approves of this; he desperately wants her ass re-elected.  This is not going to help her.  When November rolls around, Susie's going to hear the snip, snip, snip of the voting public as they shear her from her position.
And just one final musing, a lot of Evangelicals feel the 10 Commandments should be not only posted in classrooms, but in every place the public gathers.  If that ever happens, they're going to have to snip, snip, snip and edit, unless they decided to just borrow the Idiot Jerk's sharpie and draw and line through 'Thou shalt not bear false witness.'  hhhmm.  Actually, I think the sharpie's the way to go.