This will not save your life

And on the first day of my mini-vaca I slept in... until 0800.  Well, that's not quite right, I did get up at my usual time to let the dogs out, but then I went back to bed.  But now I'm up, and as always there are chores to do.  I think for dinner I'll do Coq au Vin, or at least my version of it which pretty much consists of wine, chicken legs, onions, and mushrooms.  Hopefully it will be yum.
For those of you who haven't been paying attention, Brexit is now official.  I don't believe many of those who voted for the separation understand that now they are still going to be dealing with the EU, or that as a small, independent nation they are not going to have the power they might think they have.  The EU will leave them behind.  This is how it goes.
Here in the states, the Senate will be voting on acquitting the Idiot Jerk in the White House.  Nobody should be surprised.  The Republican held Senate will let him get away with whatever he wants.  As Alexander Hamilton said, to convict him would be to convict themselves.  Moscow Mitch knows this, hence no witnesses.  While some of those with faulty brain pans believe Biden and his son are the key, Moscow Mitch knows the truth.  Witnesses would have been a bullet to the head.  Rather than do that, they chose to inflict some serious political damage upon themselves.  In order for them to survive in November the economy needs to be simply stellar... oh, did any of you see what happened to the stock market yesterday?  The fallout from the Coronavirus is just starting.
Oh, my, fear is stalking the planet.  The flu is worse in terms of mortality, but the Coronavirus is easier to catch.  And I read this morning, they believe it survives the big drop into the toilet.  Yep, it's in your feces.  Shit!  I also think they believe the baby viruses use an airborne delivery system as well.  With that being said, this will not save your life. 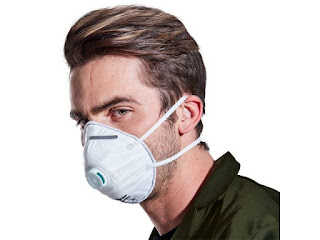 Yepper, those virus babies are much smaller than the dust particulate this was made to keep out of your lungs.  Wearing one may ease your fears, but it will not keep you from getting sick.  Nor will this flimsy, little mask keep the Coronavirus from effecting Wall Street.  I saw where Apple is closing it's stores in mainland China.  It's already too late.  This virus has a 14 day incubation period, a time when you are contagious but have yet to exhibit symptoms.  Son of a bitch!  What we may actually be seeing is an Act of God... which is terrible for the Idiot Jerk in the White House.
Posted by Dave R at 10:23 AM