Today might be a bit pricey... I'm having Pronto Plumbing check out my drainage pipe... the one running to the sewer.  I have a leak which is going to need to be fixed and... well, plumbers are expensive.  I was using Zimmerman's but they were exorbitantly high.  You know there's a problem when plumbers are making between $60 and $80 thousand a year.  Can we talk about being over priced?
I finally finished editing 'The Bend in the River,' and now get to move on to Chapter 31 'Pickup Lines.'   Only 5 more chapters to go, about 40 pages.
Yesterday I had the joy of riding Mur de Huy which has an average of grade of 9% but a maximum grade of 26% - which similar to riding up a staircase.  Who ever knew Belgium had such steep hills.  Holy Crap!  I grabbed this vid from YouTube of some guy climbing this... hill.  My speed dropped down to 1.8 mph.  Most of us walk faster than that.  I really like the bit where he slowly passes cyclist who are walking their bikes up the hill.

I guess everybody is beginning to go after Bernie and his nasty supporters.  We shall have to see how this plays out.  I guess Mike B will be standing on the debate stage... is it next week.  Bernie hates him.  Let's be honest.  If Bernie had Mike's money, he'd be doing the same thing.
And finally, pull out my Korg X50 and put it where the Elliptical sat for so many years.  This is interesting because for many years a very large upright piano occupied the same space.  Hey, I even pulled out the directors chair I got when I opened the Colorado Springs Marriott.  This is called dating yourself. 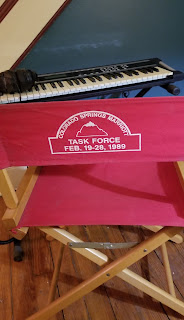