A bullet in the Head

Well, it's Sunday.  I will have to come up with some sort of entertaining chores to pass my time today.  Originally the plan was to drive down to York and visit my friend Betsy, however last evening to tell me she had some of sinusy throat infection.  I guess I could always spend the day working on "The Body in the Well."  The first 65 pages have been edited, of course this is just the first edit.  I have three people who will get copies and colored highlighters, one of whom is an 80 something year old great grandmother.
I did make my Coq au Vin yesterday.  I do alter the standard recipe though.  Rather than use both chicken legs and thighs, I only use the drumsticks.  While I'm not opposed to gnawing on a decent thigh every now and then, chicken thighs are out.  Nope.  They are not included in my culinary catalog of foods considered scrumptious.  The finished dish: 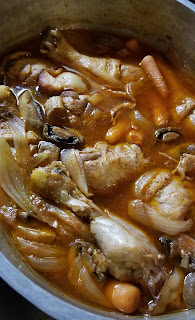 And my, I must say it was rather tasty.  I serve it with a side of linguine. hhhmmm so good.
Here's a fun fact for those who are interested.  Even though Brexit is now considered a 'done deal,' we're going to have to endure another year in which the Brits try and hammer out trade agreements, etc.  Holy Crap!  And it seems as if Bojangles Johnson is trying to dance around the dirty details.  he has a speech planned which will be heavy with promise and light with substance.  But then this whole Brexit thing has been based on empty promises.
Oh, and (chuckle, chuckle, chuckle) Lamar Alexander has opted to talk about his opinion, not on witnesses in the impeachment trial, but on the acquittal vote the Republicans will try and shove down America's throat.  Yep.  Lamar says it's not up to the Senate to convict, rather the American people should do that at the polls.  This is his way of admitting he voted against witnesses because Bolton's testimony would be like a bullet in the head of the Republican Party.  The last thing the GOP could afford was to have witnesses.  Hunter Biden would have made them the laughing stock and there was no way they were going to allow John Bolton to draw cross-hairs in the middle of their forehead.  And the Evangelicals are saying "thank you God for letting us cover up this evil..." well, they're probably not vocalizing the 'evil' bit.
Posted by Dave R at 7:35 AM