Today is the last day of my weekend and it's supposed to rain.  Yesterday was a drizzly mess.  I painted some baseboard trim.  I'm going to be moving my sideboard to the wall in front of the stair case.  For that to happen a repaint needs to happen.
And yesterday the last of my elliptical was picked up by a scavenger.  I set the flywheel, the heaviest part, out on the curb and about an hour later a man in a black pick-up stopped and threw it into the back.  Gone.  I'm glad I used it extensively, it's a bitch spending a lot of money on a piece of exercise equipment and never using it.  I have a friend whose basement is filled with such equipment.
I'm still waiting for Social Security to send me my W2.  This is getting aggravating.
And here's an updated pic of the sweet potato I'm growing in a coffee pot. 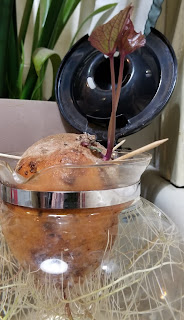 Nice, huh?
I don't know if any of you read Politico but they had an interesting article about the elections... and forecasting them.  Evidently there is a woman named Rachel Bitcofer who is upending traditional theories.  Her theory is that elections are not won by 'swing voters,' those Independents who flip flop back and forth between parties depending upon what candidates are offering, rather it is voter turn out which decides elections.  By now, everybody knows Hillary lost because voters just stayed home.  They had a litany of excuses as to why they chose this option, but stay home they did.  And we got the Idiot Jerk in the White House.  Turn out of MAGA heads was strong.  According to Bitcofer's thesis, those MAGA heads were always MAGA heads.  They were not voters who suddenly decided to vote for a moral degenerate.  To prove her point, in 2018 she called every election... and got them right.  She also claims 2018 was just the beginning.  An impetus is needed to get voters off their asses and into the polls.  In 2012, it was the Tea Party which burgeoned under the hate of the Idiot Jerk in the White House.  In 2016 he was elected... by the electoral college, and that is the impetus for the 2020 change.  This man is hated by more voters than any one previous candidate.  Polls are nothing.  Turn out is everything.
A few days ago I mentioned how I, myself, was doing an impromptu poll.  I asked a number of people who they though could beat the Idiot Jerk in the White House.  I specifically said, "this is not about who you like, it's about who you think can beat the Idiot Jerk."  Except for one individual, they all responded with one name:  Bloomberg.  This is not about who you like.  This is about Victory.