The Wave is on the Way

I'm taking a personal day today, not because I'm ill, Secco's going to come and verify my sewage line is now... intact.  The front of my basement is drying out.  I also get to pay for their services this morning.  Surprisingly, my tax refund was deposited into my checking this morning and that will pretty much cover the expense.  Talk about blessings.
There was a debate last evening, and, as usual, I chose not to watch.  I understand the candidates were fiery, going after Bloomberg as well as each other.  Now I know there are those out there who wish one candidate, a front runner, would take the lead.  I'd like that, the problem was that in the beginning there were what?  16?  17 dumb asses vying for the nomination?  Six candidates is a nice round number.  That large field should have been winnowed down much sooner.  Now that most of the chaff has been cleared away, people will start listening to what the candidates are saying. Rest assured, one of those 6 will be our next president.
Indications are growing that the non-voter is going to be showing up at the polls this coming November.   This is to be expected.  I'm on the Rachel Bitcofer team.  That''s right, I've begun to believe there is not one vast group of perennially, flip-flopping Independent Voters, not that there aren't a few, but just not enough to swing the election.  The idea that Independents sit down, listen to the candidates, and then weigh the issues before voting is flushable.  That's just a foolish as believing there are American voters who any type of morally degenerate behavior from the Idiot Jerk as long as the economy is good.  Human beings are not nearly that selfish and self-centered.  If you ask any Republican, they will gloat in their self-assuredness and tell you there's no way the Idiot Jerk is going to lose this November.  They have absolutely no idea how bit this Blue Wave is going to be.
So, what are my plans since I'm taking the day off?  Laundry... I have about 6 loads to do since I couldn't do any because of my sewer issue.  Edit more of The Body in the Well.  I was talking to Cori yesterday (my cover artist) and we were trying to come up with a way to put a snake on the cover.  And, since I bought a bag of pears, possibly bake a pear tart.  Something like this. 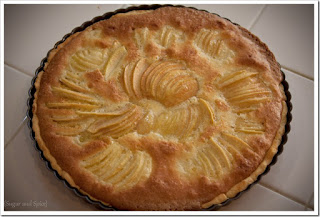 I will take pictures if it looks this good.
Posted by Dave R at 6:24 AM