For some it's the weekend, for me it's Thursday.  Aren't you glad you don't have to live with my calendar?
If the weather forecasters are right, today's high of 41 (F) is going to be a cold snap.  This is so much different than last year.  Remember, we were getting those arctic creeper things?  Temps in the single digits?  All the MAGA heads were running around squealing "where's the climate change?"  Now I hear them at work saying "aren't these temperatures wonderful?  such a nice, mild winter we're having."  I saw this pic from, of all places, Antarctica: 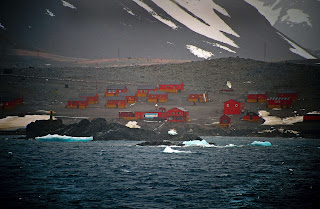 They're having a heatwave in Antarctica.  Yepper, the temps down there hit 64.9 (F).  Instead of understanding the reality of this situation, the greedy of the world will say..."hey, when can we start drilling for oil?"
Oh, my, and I had a Text from Bernie, or one of his supporters yesterday.  I get them regularly from the DNC, so that might be where they got my number.  He asked if Bernie could count on me.  My response:  "No, Independent voters will never vote for a Socialist."  He asked if I'd want to tell him who I was planning on voting for and I responded "I won't know until Primary time rolls around.  I do know Independent voters are the key to beating (the Idiot Jerk in the White House).  Of course, I got no response.  Bernie supporters are, in a way, a lot like MAGA heads.  They want you to jump on the crazy Far Left train without understanding that up ahead the bridge is out.

And just one more bit of fun news.  Evidently Far Right Crazy Christian Franklin Graham has had his Hate Tour of the UK cancelled.  What makes this interesting is that those complaining are British Evangelicals.  What Frankie doesn't understand is that he has just been given a Sign.  Frankie will ignore this because he, too, has jumped aboard his only special Crazy Train.  He believes his interpretation of Divine Scripture is far superior to that of anyone else.  Frankie's bridge is out, too, of course that isn't going to stop him from tipping his little, red hat and shrieking "Full Speed Ahead!"