Oh my gosh, it's Friday, my Hump Day.  I can't say I find it exciting in the least.  It's just another day.
I rode 10.5 miles last evening on a ride called Applegate lake.  I've ridden a little over 44 miles in February so far, which is better than I was doing last month.  I've changed my tactics.  Rather than go for the long rides (20 miles or so) I'm only covering between 10 - 11 miles per ride.  Instead of spending easily over an hour on the bike when I get home from work, I'm only putting in between 40 & 45 minutes.
I'm still waiting for my W-2 from the government in order to do my taxes.  You know?  If you work, and get your full Social Security benefits, you need to treat those benefits as a job.  That's right, they take out taxes.  I have no problem with this since I get them back when I file.  However, I do like that refund deposit going into my bank account.  For those interested, here's the return schedule. 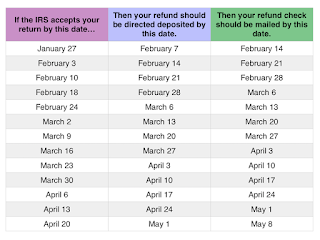 I guess the Idiot Jerk went on some sort of shrieking rampage yesterday about his ugly ass getting impeached.  Wow, now we know what happens when we rip the scab off that chancre he calls and ego.  He says he went through Hell.  Aaahhh.  Think about all of those contractors he and his attorneys forced into bankruptcy because he refused to pay them.  Was he sorry for putting them through Hell?  Gimme a break.
And Bernie desperately wants to do a victory lap after Iowa.  We're talking about his old man ego here and it desperately wants to be fed.  Ain't happening.  Buttigieg and he ended in a dead heat.  You'll notice the difference between the two:  Buttigieg shows decorum, Bernie's on the verge of pounding his fist angrily on the desk.  He's inciting his supporters the same way the Idiot Jerk incites his base.
Anyway, I understand the administration is girding it's shield of lies in preparation for the publication of John Bolton's book.  They know this is not going to be a good thing.  America will find out why the gutless Republicans refused to have any witnesses at the impeachment trial.  Once again Americans are going to see how much evil they not only tolerate, but excuse as well, in order to stay in power.  This is expected from a party which demonstrates terrible intolerance for everything they despise.