A vote for Daffy

So, I've begun my 3 weeks of shitty schedules.  That should change during the middle of March when I've scheduled myself to take some vaca time.  I cannot wait.
Last evening, I finished The Body in the Well.  I am so glad.  I've been working on it for 11 months and it's break time.  This morning, I started printing off the first copy for my readers and... I ran out of toner.  Son of a bitch.  That means around 0900 I'm going to have to run in to Staples and pick up a cartridge or two.  For those interested, the book is 94,472 words long.  The copy I print out is 248 pages long, it will be longer when the paperback version comes out, their pages usually only hold about 250 - 300 words.  I suspect it will be available sometime in mid-April.
This means I will also have between 1.5 - 2 hours of free time every evening... for a while at least.  I will enjoy the time, for a while, at least.  Notes are already being taken:  Scotland...castles... secret passageways... and men in kilts.
I do get a chuckle out of all the 'nay' and 'maybe sayers' in politics right now.  A lot of this is media hype.  There's a difference between that and 'fake news.'  The Idiot Jerk's administration call anything unfavorable 'fake news,' all the while pumping its own lies.  Pundits who are desperate for crumbs of attention are pounding their shoes on the table shrieking "who can beat the Idiot Jerk?"  Well, do you want to know who can beat that scumbag?  Here he is! 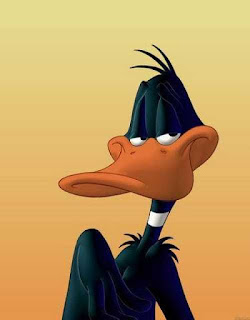 Now I know some of you are saying "hey, that's an animated character."  That's the point.  There is so much pent up anger and animosity towards the Idiot Jerk and his party, even Daffy Duck, if he could run, would beat the pants off him in November.  Should Bernie get the nomination, no one is going to sit on the fence saying "I'm not a fan, so I'm going to give the Idiot Jerk in the White House another 4 years."  This is why, when people say the Idiot Jerk's going to win in November, I say "hell, even Daffy Duck could kick his ass."  American anger will not be mollified, so do not discount it.
Posted by Dave R at 6:45 AM

Email ThisBlogThis!Share to TwitterShare to FacebookShare to Pinterest
Labels: 2020, Daffy Duck, Donald Trump, November, The Body in the Well