Saturday.  It's difficult to tell if the store is going to be busy today or not... mostly because of the temps.  We're supposed to hit 65 (F) and there is that group of non-thinking customers who fail to realize we still have a little over 2 months of winter ahead of us.  Believe me when I tell you some moron is going to show up with a trailer and want to buy 15 bags of mulch...  And then they'll complain (and there will be more than one) why isn't it on sale?  And you can bet we'll have one or two asking when we're getting our tomato plants?  Cause you know, tomorrow the temps will soar in the high 60's (F) again.
Starting tomorrow I'm off for 3 days.  That will be nice.  My first complete read through of "The Body in the Well" is going... well.  The polishing starts, lines get tightened, and I start going through all of those little post-it notes, the ones reminding me certain points need to be made.  If you go see  "Knives Out," part of the set decoration was having quite a number post-it notes stuck to the wall above Christopher Plummer's writing desk.  Might aren't on the wall.  Mine aren't on a wall, they're on a pad on my desk.  Believe me, they are very important.  Here are some of them... now, the question you need to ask yourselves are these clues... or red herrings? 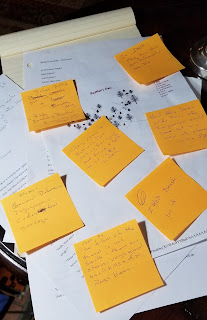 I saw where Mary Anne Dippy Do has dropped out of the campaign.  The fact that she believed her message was going to win her the presidency is an indicator of just how far away she is from reality.
Oh, and the Idiot Jerk's campaign began heating up their attacks on Bernie.  The truth is Bernie is a lot like Mary Anne Dippy Do, his supporters just don't realize it.  Still, the more jibs and jabs the Idiot Jerk gets from different points is going to wear on his campaign.  The Republican's Moral Degenerate in the White House doesn't deal well with attacks.  He loses his cool.  His obvious lies start announcing themselves with fireworks.  Blatant stupidity is his Achilles Heel.
Posted by Dave R at 6:42 AM

Email ThisBlogThis!Share to TwitterShare to FacebookShare to Pinterest
Labels: Donald Trump, Knives Out, temperatures, The Body in the Well, winter