Oh my, I set the alarm and got up close to my normal time this morning.  Prepping for tomorrow's back to work day.  I'm scheduled for 6 in a row, however the weather's supposed to turn nasty on Saturday (day 4).  Snow, you know?  Forecasters are say we may get anywhere between 2 - 8 inches depending upon what time of day and which app or radio station your following.  There's not an imminent  threat of heavy snow, they just want to deter you from driving.
And for those interested, I did bake my Devil's Food cake yesterday.  The topping is a peanut butter frosting sprinkled with walnuts... I love nuts! 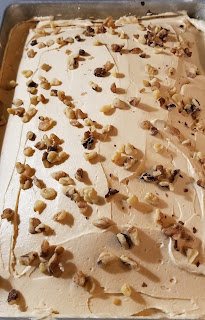 And yes, it is a sheet cake.  Since I don't have a container for layer cakes, I'd need to eat the whole thing in one sitting.  And I know some of you are crying "show us the cake,"  "show us the cake!"  Well, feast your eyes on this. 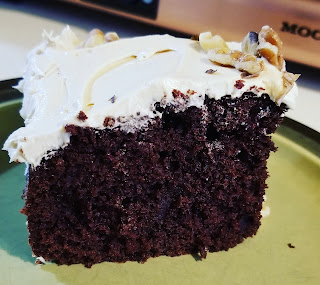 Now I know some of you no doubt think the entire cake was in imminent threat of being eaten, I'm proud to say I managed to deter myself from such an attack upon this deliciousness.
In case some of you didn't see, the Idiot Jerk, and his administration, is now saying Soleimani was not assassinated because of an imminent threat, but rather his death was intended to be a deterrent.,,. as well as boost the Idiot Jerk's sagging approval rating.  Son of a bitch!  How many different ways can they spell stupid.
Another bit of dashing news is that the Russians hacked into Burisma Holdings, the company Biden's son worked.  No doubt they're trying to back up the Idiot Jerk's claims.  Why you ask?  Well it seem that when it comes to world wide approval ratings, Vlad scores higher then the Idiot Jerk, so does Xi, from China.  That's right, most people in the world believe the Idiot Jerk is more of an imminent threat then they are.  The good news for him is that he scored higher than Kim Fong Dumb.