It's Thursday... I know this because I checked my calendar.  For some reason I thought it was Friday... wrong.  Believe me, I would really like it to be Friday.  It's my approaching vacation... and the fact that it's slow at work.  This is not flooring season.
I went riding in Utah last night, not my normal 10 or 11 miles, I was on a new route... with hills, strep hills - 10% grade.  I took a snap.  My position is marked by the little blue helmet. 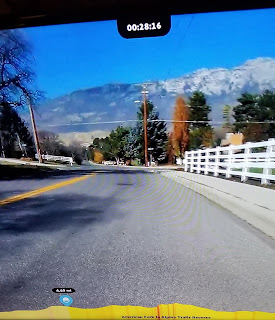 My legs are a little sore this morning, so I'll take the day off. I like this ride, though, so I'm going to focus more on it and build up some strength in my legs.
The Idiot Jerk held a White Republican Rally in Greenville, North Carolina.  It was racist as all get out, with the very white crowd chanting "send her back."  The ugly man is fueling hatred towards minorities because he wants to, because it gives him joy.  He so desperately wants to wear the mantle of American Dictator.  His approval rating has gone up a few percentage points... among white Republicans.  The rest of America is inching backwards in horror as the party of the Idiot Jerk creeps deeper into fascism.  Believe me, the Idiot Jerk would love to run a fascist country and so would the Republicans.  They hate the constitution because it restricts them, binding them with rules which deny them the control they so desperately want.  One good thing is that they are a minority group, themselves.  Vast majorities do not stand behind the Idiot Jerk.  His approval rating has been sitting, for the most part, in the low 40's since his election.
Democrats need to come together.  The infighting between the middle and the far left needs to stop until after the 2020 election.  If this means AOC needs to bite her tongue... well, then she needs to bite her tongue.  Centrists and Independents are the key.  Do not piss them off.  The Idiot Jerk does not know how to deal with a wall of unity.  He and his sycophants will chip away at every crack they can discover.  Unification is the only way to beat this Evil.  I like The Squad, but they need to become for Centrist in their message if we hope to defeat the Idiot Jerk.  The Squad needs to become a name he hates.  They need to represent truth, justice, and equality for all Americans.
And, now that Al Green (D - Texas) has failed at his little impeachment stung, he needs to put on his Big Boy Pants and join the team.  His priority must be to help win the White House back from the Idiot Jerk.  He needs to pocket his hatred until we Americans can begin to prosecute the Idiot Jerk and his henchies.
Posted by Dave R at 6:40 AM