It's Saturday and the temp is supposed to hit 98 (F) today.  It was 99 (F) when I left work yesterday, and last evening, after things had cooled down to a sweltering 95 (F) my mowed his lawn... with a push mower.
I have 15 more miles to go before I complete my Trek Challenge - a lot of those will be done today.  Inside on my trainer, of course, since riding around outside today might be considered grounds for committing me to the nearest cycling asylum.
Interestingly enough, I least I think so, in The Body in the Tower Eli and Max fly down to Pau, France, for the mountains stages in the Pyrenees and yesterday this year's tour was actually in Pau. 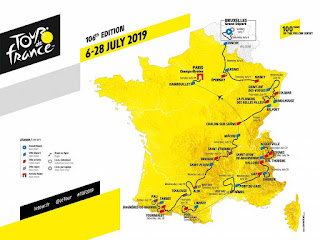 I did see, as I copied that link, Amazon has the paperback version on sale for Prime members.
So, besides riding what am I going to be doing today?  Well, lotsa laundry.  My, doesn't that sound fun.  Remember, it's going to be at least 98 (F) outside.
And, of course, even though the Idiot Jerk tried to distance himself at first from the racist chanters at his rally, now he's defending those white supremacists.  That should be no surprise.  He wants to turn himself into a god for his base, a group of aging white people committed to the denial of science.  They are desperately clinging to the dark ages of the 1950's as though they are the last life preserver from the Titanic.  They don't know the smart people, the ones who used their noggins, are the ones who got in a lifeboat, or jury-rigged a raft.  There is no salvation for them... literally.  The heat is on and instead of understanding they need to work to save the ship they're jumping overboard.
Finally, I started watching "Dark" last night on Netflix.  It's a bit of a scifi supernatural thriller and it is... good.  Here's the trailer.