Lily in the Yard

Well, here it is... Thursday, and I have the day off, then I go back and work for 3 days and have another 2 days off.  I've said this a million times, I hate having single days off.  For some reason the scheduler has chosen to only give me 32 hours a week... I don't really have a problem with that.
How's this for the funny, crazy Christian, daft Republican story of the day?  Evidently there is a Republican candidate for Governor who has decreed women reporters following his campaign need to be joined by a male.  Not figuratively, of course, that would be sinful.  He says it's because he doesn't want people thinking he's having sex with them...  Personally, I think it's because he sees all women as the blackest of temptations and he knows he will succumb to their wanton ways.  In other words, he's pretty much of a loser.
Oh, and in case anyone is wondering, the Tour de France is playing on the big screen TV downstairs... Live.  I don't sit and watch every second of every stage... but I can hear it.  Today's stage is about 100 miles long... with hills, which means it will be a 4.5 hour ride. 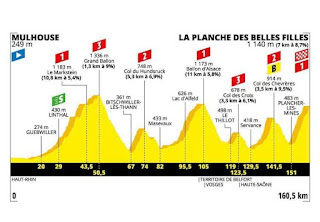 I guess the Idiot Jerk is going to makes some sort of Executive Announcement today about the Citizenship question racist Republicans want on the 2020 census.  These are desperate old white people grasping at their last straws of control.  They are completely unprepared for the evolution taking place.  Blame their narrow minded religion.
Anyway, while I was doing yard work on Tuesday, Lily spent much of the time watching me.  Seig likes to sleep inside in air conditioned comfort... she, on the other hand, loves to be outside.  So, here's a picture of the lovely Lady Lillian. 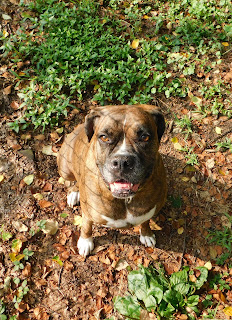 It's hard to believe this little dog weighs 60 lbs.