Something is eating my nectarines!  I have no idea what... some sort of buggy things.  It's actually not that upsetting.  I hadn't planned on being able to harvest any this year.  I'm off tomorrow and that's one of my yard work chores.
In my Trek Riding Challenge I am 98,983 in the rankings.  That sounds bad, right?  Well, there are actually 41, 208 cyclists who are doing worse than I am.  Oh, and I hit 50 miles yesterday.  Also, I can tell you that some of the few ahead of me have over 1000 miles in so far this month.  Think of that, the month is not even half over and they've already traveled more than 1000 miles on their bikes.
One of the things I did to aid myself in learning Greek was to print off a copy of the alphabet.  For me, learning a language has always depended upon specific sounds with specific letters.  Showing me a word with letters I've completely unfamiliar with is not the way to teach me, especially when at some point I'm going to have to write Greek... and that depends on spelling.  I also write down the new words I'm given.  You need to be familiar with the Eta, Beta, Theta... if you know what I mean.
On Jeff Epstein: there are a lot of words being written about how he, as a sex offender, a jailbird, managed to get so many of the rich and powerful to turn their heads.  He lent his jet to the rich and famous.  Here is a very small list of those many who flew Little Lolita down to Florida:

Holy Shit!  Barbara Walters!  Mike Wallace!  It wasn't just Prince Andrew and Bill Clinton, there were a whole slew of people.  So, were all these people being flown down to one of his parties?  No. Before we blindly brand everybody with Epstien's evil we need to get to the truth.  He is not some dolt, like the Idiot Jerk in the White House, rather he is exceptional when it comes to muddying up the waters.  The truth he doesn't want you to see is there, all you need to do is filter the water first.  His purpose has always been to do what he wants by covering his ass.  Tell me, do you really thing Mike Wallace and Barbara Walters got massages from 14 year old girls? 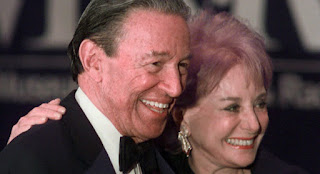 Of course, you never can tell.  Maybe they made a sandwich with Tony Blair...