Well, it's Monday, I work, and I'm less cranky then yesterday... though I did wake up to a torrential downpour this morning.  The dogs will sit on the back porch and look out at heavy rain, glancing at me occasionally just to let me know they're not going out.  They don't like the rain.  Once it subsides they'll go out and do their business.
I missed yesterday's Team Time Trial.  Education First came in 6th, here's their team.  They leve Belgium for today's stage, which takes the riders from Binche to Epernay, a mere 214 kilometers, and hilly.  In fact, while I'm typing this, they are riding across the French countryside. 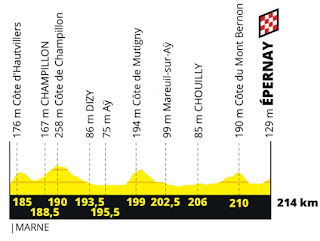 As for my own little cycling challenge, I rode 8.65 miles yesterday.  All I need is another 80 miles to hit the goal of 100 miles.  That should be no problem.
I guess the Brits are going to apologize to Ivanka Danka for the leaked cables describing her old man's administration in some not so flattering terms.  I personally liked the "uniquely dysfunctional" bit.  Do you think the Idiot Jerk in the White House will realize this is how most foreign governments view his administration? Absolutely not.  Interestingly enough, the British government as labeled the leaker as 'mischievous.'  That shows you just how seriously they take the Idiot Jerk.  Sadly, for them, because the Idiot Jerk is nothing more than a petty, tyrant wannabe he's going to make them pay through the nose.  There will be no fair trade deals with the US if, or when, Brexit goes through.  Of course, that should come as no surprise.  This administration is totally one sided in every deal it tries to strike, phony to the end.  So, all you Brexiteers who think you're going to be able to rely on the Moral Degenerate in the White House to help you... Surprise!