How to Treat an Inept Politician

Holy Crap!  It's Wednesday... and I go back to work for 3 days.  Trois jour ou les temperatrues seront tres chaudes...   The humidity is already here.  Yikes!
I had an eye exam yesterday.  It's been 6 months since I stopped using the eye drops.  And the good news is?  I don't have Glaucoma, as diagnosed by my first specialist.  That's nice.  The pressure in my left eye actually dropped... now ain't that nice.
I have 79.5 miles completed on my challenge.  That will be easy peasy.  For those who are curious, here's a snap of my riding set-up. 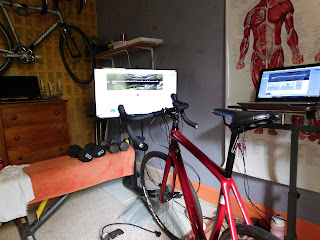 When I'm riding a route, the TV in front of the bike show a video of the route.  The only thing bad is going around curves because I'm on a stable bike and the camera leans into the turn, the way I would if I were riding the actual road.  I can live with that.
The House passed a bill censuring the Idiot Jerk for his inflammatory rhetoric yesterday.  Oh, and some dingle-brained Democrat from Texas introduced a bill of impeachment.  Don't try and impeach!  The last time a political party impeached a president, Clinton, he went on to win a second term.  We need to legally vote that Moral Degenerate out of office, and then prosecute... prosecute... prosecute. We need to get the AG Billy Barr disbarred.  The rest of the Idiot Jerks terror team will be jailed for committing crimes against humanity.
And the Idiot Jerk's rhetoric?  It will not only continue, it will get worse.  Instead of throwing temper tantrums, our representatives need to begin to throw it back at him in a very... nonchalant way.   Don't take his bait.  They need to start using phrases like "These are the things you expect an inept politician to say," and "These are the words of a failed political hack."  When people call him things like this he flips out and makes himself look even worse.  Don't try and impeach the sucker, just piss him off.  Let him do the dirty work himself.
And now, for some pretty snaps... of my purple dahlias.  Yes, they are blooming. 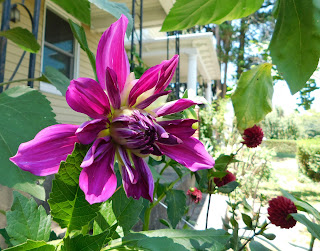 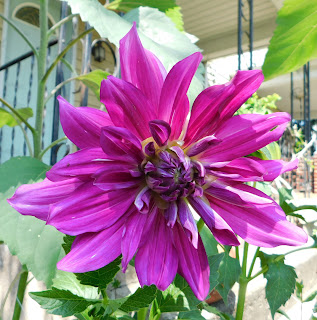