So, it's Tuesday, my day off and I slept a little late.  Lots to do today... like pay my taxes.  I am not opposed to paying taxes.  Nothing is free in life.  In case you're wondering, we have the lowest tax rate in the area.  I  don't mind paying them.
I woke up yesterday morning to an inch of water in the basement.  This happens too when you have a 114 year old stone foundation and your basement was excavated in the middle of a shale field.  I haven't checked this morning yet, but things should be fairly dry by now.  Water runs in at the back and out at the front.
I went to see Spiderman, Far from Home last night.  I enjoyed it.  The Marvel Super Hero movies have all been better when the revolve around just one character.  The storylines are concentrated to provide a single, two hour arc since there's no need to provide a large number of characters 15 minutes of obligatory screen time.  Villains have time to build character, rather than just be the bad guys, and the villain here is bad, no doubt about it.  And heroes?  You get to see their personalities grow, their weaknesses are exposed and they evolve.  Tom Holland did a very good job.  You like his insecurities and naivete.  Not only do you like him, you like his friends.  I was also please to see Jake Gyllenhaal leave his desperate Oscar aspirations behind and play a part not geared towards getting himself a nomination. 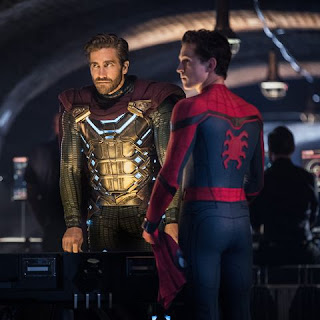 And I guess they brought in extra cleaning crews to clean the shit out of the White House after the Idiot Jerk exploded after he learned the UK Ambassador was laughing at him.  He has that ego,you know?  Inept.  Nice word.  That little 'pt' sound at the end sounds so much like you're getting ready to spit.  He has no clue as to how much ammunition he's giving the Democrats.  Picture this:  He's in debate with Elizabeth Warren and she drops this little sound bite grenade: "when world leaders are quietly muttering to themselves about how dysfunctional and inept this administration is, nothing is going to be achieved."  And it doesn't have to be Warren, it can be anybody, because now we know just how easy it is to get his head to explode.
Posted by Dave R at 7:46 AM