Okay, so it's Friday and I have to go back to work for 2 days.  How's that for a mini bite in the ass?
And the smorgasbord of shit the Republicans are offering the American voters is getting steamier... I'm at a loss of words to describe just how steamy... which is saying something, you know?  The Idiot Jerk admits to ABC News (one of his so-called Fake News Networks) that he would basically collude with a foreign government to get dirt on a political opponent.  Apparently he doesn't understand that's what the Mueller investigation was attempting to prove.  Then McConnell said he would kill anything Democratically sponsored... how's that for partisan brinkmanship?  The NYT has an interesting article on McConnell's phoniness.   Pompeo's using a an extremely blurry video clip to blame the Iranians for the attack on those 2 tankers.  As an Evangelical Christian, he wants a war with what he considers the greatest Muslim enemy in the world.  The Chinese hate Pompeo, they believe he's partially to blame for the tariffs.  And then... of course... there was the Prince of Whales Tweet.  That proved his stupidity, which is nothing new to most of us. 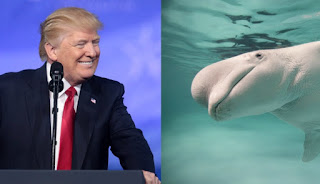 A comment from Sixpence yesterday gave me an idea.  I've been posting pictures of the three individuals I thank in the book for helping with the editing process.  Coming up you'll get to see who does my cover art.  But I was thinking... if one of you buys either of my books, and gives it a decent review, and chooses to send me a picture, I will post it here as a way of thanking you.
On other writing news, I'm doing an update to The Body on the Lawn.  After publishing, I realized a global command I had done had gone awry... I'm fixing that.
Yesterday, during a break in the rain, I let the dogs out.  I looked out about 5 minutes later just to check on them and there was Big Seig, standing under the nectarine tree eating green nectarines.  Oh, my, he had the worst gas last night.
Posted by Dave R at 6:19 AM