Well, it's Monday, my 5th day out of 6 scheduled work days.  Will I make it through tomorrow?  And complete all 6?  Hhhmmm.
I ordered some hostas for the shady area under the river birch, they arrive today.  I was going to buy some at work but they sold out... go figure.
My left knee is sore, must have twisted it the wrong way coming down off of a ladder.  I had to get 3 boxes of Lash flat tile spacers for a customer yesterday.  He returned them later, evidently he didn't know what he wanted.
A bit about my writing.  For those who don't know, I live in Central Pennsylvania, which is actually the tip of the so called Bible Belt.  Being Ultra Conservative, I found I needed to drive down to Giovanni's Room in  Philadelphia if I wanted to buy books with gay characters.  Then came Amazon.  It was great.  No more 2.5 hour drives to buy a couple of paperbacks.  And then something bizarre happened, a number of authors started using their initial rather than their given names.  You know, like I.T. Lucas, and S.J. Hines (as an example).  Being the inquisitive person I am, I Googled these authors and discovered they were actually women.  That's right, women were writing gay books with gay protagonists, not lesbian, mind you... gay.  They still are, though now they no longer strictly use initials in their 'nom de plumes,' you know?  Now they're Sloane... or Casey.  What these authors are really doing is writing female protagonists with a female point of view and just giving them men's names, like Gary, or Frank, or Tom.  I've always had a problem with this; I'm white so I can't write from a black perspective, or a Latino perspective, and I am definitely male and therefore cannot write from a female perspective.  I'm not saying that what they write is bad, these authors sell a lot of books.  However, this is one of the reasons I started writing again, to provide an alternative that is truer than a fictitious 'nom de plume.'
Anyway, my honeysuckle's in full bloom. 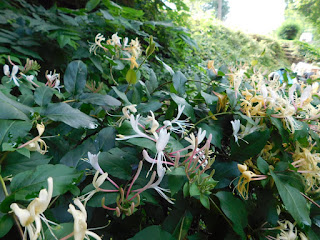 On the right hand, side you can see my neighbor's stairway leading to the top of the hill behind our houses.