Oh, dear me... the Idiot Jerk's approval rating is dropping... among Independent voters.  Now, isn't that a surprise.  And this was before he waved a piece of paper touting a 'secret' deal with Mexico.  People in Washington are whispering among themselves "what secret deal... what secret deal?"  In case you didn't know, his base believes him.  They're ecstatic.  This is better than the secret sauce used on your Big Mac!  Tasty!  They are on the verge of foaming at the mouth.  And the icing on the cake is the "nice" letter he got from Kim Dumb Shit... on their anniversary.  The only problem is that the Independents are saying "wait a minute, this guy's an asshole."  Believe me, this does not bode well for the Idiot Jerk in the White House.
Anyway, Don, one my other readers, received his copy of The Body in the Tower yesterday.  He has a degree in English and is the closest thing I have to an actual editor.  When I got his copy of the manuscript back there was red ink all over it.  He wrote things like 'vague,' and 'confusing,' and 'what happened to the yellow sock hat?'  Here is Don. 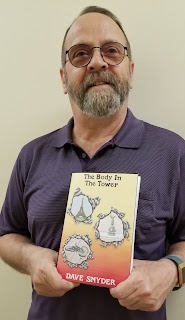 Don did not appreciate the way the narrative switches between  1st person and 3rd person.  Well, I fixed the 'vague,' and the 'confusing,' and answered the questions about 'the yellow sock hat,' and left the narrative switching as I had originally written it.
I'm off tomorrow and they're forecasting rain.   That's fine.  I don't mind as long as I don't have to go to work.  In 2.5 years my car will be paid off.  Then I'm going to go part-time.
And Biggie just gave me a purple, squeaky squirrel.
Posted by Dave R at 6:30 AM

Email ThisBlogThis!Share to TwitterShare to FacebookShare to Pinterest
Labels: Donald Trump, Independent voters, Mexico, The Body in the Tower.