Thursday... the 27th of June.  The forecast is for stinking hot temperatures - up in the 90's (F).  Yesterday was hot, too.  When I got in my car to leave work the temp was 96 (F).  That's a bit on the warm side.  Since there was not a lot of humidity it wasn't too bad.  We're supposed to have thunderstorms pass through on Saturday should cool off a bit.  I am so glad I have Central Air, that was a worthwhile investment.
And, of course, the first of this week's 2 debates was last night.  I turned them on for a bit, not the entire thing, mind you, just for a few minutes.  I heard some of Klobuchar's none performance, and Warren talking about Medicare for All.  I did not hear anything from Ryan, or Delaney, or... oh, what's his name....  I was surprised at how fiery Warren was; I've always though of her a quiet.  The funny thing about Medicare for All is that it's nothing more than the Universal Health Care they have in Canada, and the UK, and... in fact, in a lot of countries around the world.  Here, in the United States, our government wants us to pay through the nose - that's American Capitalism.  Somebody needs to be making a fuckin' buck.  This is why the GOP has always been failures when it comes to Health Care.  They don't vote for anything that doesn't make some rich guy even richer.  Their wonderful tax overhaul shows just how much proof their is in that pudding, how the wealthy and corporations got cake out of the piece of legislation and everybody else got crumbs.  They will never change.  Greed is part of their nature.
I understand the BBC, Beto, Booker, and Castro, spoke in Spanish.  Nice.  Too early in the campaign, though, I think.  Being bilingual is an asset.  However, when speaking Spanish becomes the high point of your performance in a debate, rather than where you stand on issues, you fail.  This morning, while reading articles about last night, the fact that those 3 spoke Spanish got press portends problems since their positions on America's difficulties resonated little.
Reuters said Warren remained unscathed.  That's their way of saying she ruled the roost.
If you have your red pens ready, there are at least 5 names you can cross off your list.
Finally, I'd like to introduce you to another member of my rose family. 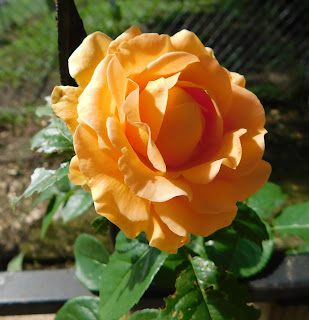 He's an orange climber.  Hopefully he will climb up the wrought iron on the side of my front porch.  He has some perfume, but mostly his color is what stands out.  In an odd way, he does what Warren did last night.
Posted by Dave R at 6:34 AM