Thursday!  Day off!  Rain... again.
My lower back is bothering me, so I'm going to start doing my 'core' routine again.  Arthritis, you know?  The disc jelly has gushed out and my lumbar vertebrae and they are slowly fusing together, which is actually more of a nuisance than anything else.  Core exercises keep things flexible, unfortunately I've been lax.  It's time to pull out the purple yoga mat, and the red, green, and yellow bands.
And the Idiot Jerk has been busy: his Executive Order on documents related to the 2020 census question on citizenship are now off limits to Congress; he said he'd listen to foreign 'dirt' in an election (like the Russkies?); the Budget gap worsened by $739 billion... and he said nothing.
What this does is define him more sharply as the most racist, crooked, and financially stupid president in America's history.  This is why he is a dream come true to Republicans.  They've always been selfish as hell and dumb as bricks.
And now I'd like you to meet Gloria.  Back when I was almost finished with The Body on the Lawn, I decided I needed readers.  Friends are good for giving feedback but they aren't always as objective as  you need them to be, so I started looking for a voice that could say "nope."  I was a supervisor back then, and one day sitting in staff meeting I said something to Pat, a fellow supervisor, about my predicament.  She said "my Mom might want to do that."  A couple days later she told me Gloria had said she'd read and critique the manuscript.  This was gamble, you see Gloria is an Italian, Catholic, great-grandmother.  I had no idea how she was going to react to a book in which the main characters were 2 gay men in a long term relationship.  She loved it. 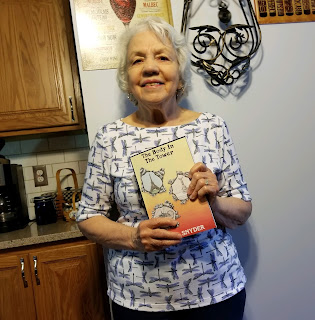 She told me that in The Body in the Tower her two most favorite characters were... Bobby Tussel and Jules Laurent, one an ex-Baltimore cop, and the other a member of the Paris police.  I wonder what she'll think of Sunny Rigalito, a character in the next book who cold-cocks her husband when he tells her she'd look prettier as a blond.
Posted by Dave R at 8:05 AM

Email ThisBlogThis!Share to TwitterShare to FacebookShare to Pinterest
Labels: 2020 census, arthritis, Donald Trump, The Body in the Tower, The Body on the Lawn