This is the future

Well, here it is... Wednesday, and I have the day off... and it's snowing. not that I was planning on going anywhere.  I have things to do around the house.
One chore already accomplished was to take all of the dog toys from upstairs, downstairs and put them in their proper place... and 3 of them are already back upstairs.  This is how it goes.  Maybe I should just move their toy box upstairs.
The United States Supreme Court is not going to let the PA Supreme Court ruling on the anti-democracy gerrymandering stand, something which was expected.  They refuse to interfere with State Constitutions.  The state supreme court also ruled that the GOP must turn over the voter data they used to create these illegal districts. Joe Scarnati, a GOP Scumbag is refusing to comply.  They are losing control and it's ripping them to pieces... let's hope they take pictures, there's nothing quite so entertaining as seeing members of the GOP being torn limb from limb.
And the Idiot Jerk in the White House wants to have a military parade... in the fall... and in New York not Washington.  Maybe he doesn't know that military parades are usually held in the nation's capital.  Or, perhaps he's just stupid.  Yep, that seems more like it.  This is the moron who also said that Democrats who didn't applaud at the State of the Union speech might even be considered treasonous.  Doesn't that sound a lot like something a dictator would say?
What about Elon Musk launching a Tesla into space?  Brought a tear to my eye when I saw that rocket launch.  This is the future.  Of course, while some conservatives nodded their approval, there were many who groused about how this was nothing more than a stunt, or a gimmick.  But then many don't like Mr. Musk because he walked away from the Idiot Jerk in the White House.  He didn't drink the Kool-aid.  Interestingly enough, Elon Musk is a billionaire who's never had to file for bankruptcy. 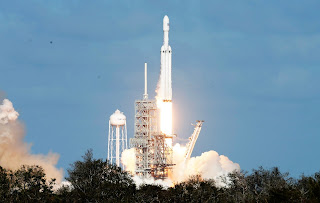 Holy Crap!  I just looked out the window and it's snowing like hell!  Guess that means it's time for the dogs and I to take a nap.