It's Sunday, and I don't have to go to work... and there is so much funny shit going on!  Mostly because of stupid ass Republicans.  I'm waiting to see a cartoon inspired by this headline:  Paul Ryan Tweets PA Teacher's Praise for Tax Break.  That's right, a teacher in Lancaster, PA was 'mildly surprised' to find an additional $1.50 per week in her pay check.  Of course, he deleted the Tweet, but only after the hysterical laughter had started.  This is indicative as to what these morons believe satisfies the average worker when it comes to getting a "Tax Break."  By the way, I first saw while reading the BBC this AM - this means the whole world is laughing.
Then there's the Idiot Jerk tweeting some sort of nonsense about the Nunes memo vindicating him.  You don't even need to cup your hand to your ear to hear about 67% of America laughing at that one.  This is an ideal example of just how much of a cretin this man is, I mean I'm sure those fools at Faux News started this knee slapper going.  We all know Faux News wouldn't lie to him.
And how about Melanoma's media moments, when the media tried to make you feel sorry for her?  Give me a break.  She was bought and paid for at the Trophy Wife Store.  She knows all about the Idiot Jerk's predilections for kinky sex, like golden showers.  I wouldn't be surprised if she hadn't advised Stormy Daniels which issue of Forbes to use for slapping his fat ass.
And then there's this bit about Michele Bachmann, that hoot and holler princess from Minnesota.  Evidently this lass with the Lollygag eyes saw Al Franken's empty Senate seat and decided to ask the Almighty if she should return to politics.  While she seems to no longer remember her campaign finance issues, He evidently still does, which is no doubt one of a multitude of reasons he disapproves. 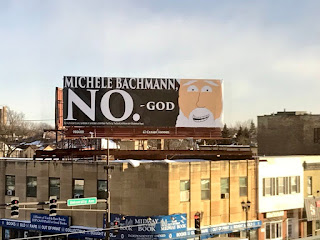 Will Michele listen?  Now you have to admit that humor would abound if this addlepated hate monger actually did chose to run...  and lost as badly as Roy Moore, with almost 44,000 people either voting against you, or writing in someone else's name.  How hysterical would it be if more people wrote in Al Franken's name rather than vote for Michele.  I would say that would be a very clear and concise message from the Almighty.